We Are the 99 Percent

This means YOU! (Unless you’re filthy rich.)

We are the 99 percent. We are getting kicked out of our homes. We are forced to choose between groceries and rent. We are denied quality medical care. We are suffering from environmental pollution. We are working long hours for little pay and no rights, if we’re working at all. We are getting nothing while the other 1 percent is getting everything. We are the 99 percent.

Brought to you by the people who occupy Wall Street. …

The story below reflects what happened to a friend of mine, a college-educated man who once had a future in IT. After designing and setting up a corporation’s computer system, and being promised a secure, good-paying job with full pension and benefits for his efforts, he was laid off once the system he created was up and running. The corporation then hired people with no experience, straight out of school, paying them a pittance to run the computer system. That didn’t work out so well for the corporation, so my friend was called back in as a ‘contracted consultant’ with no benefits, pension, health insurance or job security. Unable to find another job, he was forced by poverty to take the consultancy. Of course, they cut him as soon as he had trained the new hires and got the system working again. Unfortunately, it’s too late for him to join the protests; unfit to work due to a chronic debilitating illness and running out of money, he committed suicide several years ago. 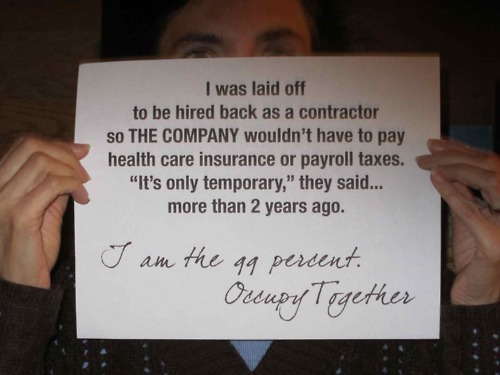 This also is becoming a common story in some variation out in ‘Real America’: My mother (leader in her field of pathology, MA) is upside-down on her house. My father (multiple PhD’s) lives in his car so that he can do what he loves for a living rather than be a slave to the system.

I am lucky to have a steady job doing what I love. I live frugally and without debt. All of my friends are jobless or homeless or swimming in debt or all of the above… I wonder how long it will be before I join their ranks… and the government DOESN’T CARE.

I want a government that puts PEOPLE before corporate BOTTOM LINES.

This entry was posted in 2012 Election, Conservatives, Corporations, Corruption, Economy, Politics, Progressives, Republicans, Wall Street, WTF? and tagged 99 Percent, Humanity Before Money, OccupyWallSt.org, People Before Profit, The Wealthy, Wall Street Protests, We Are The 99 Percent. Bookmark the permalink.
Tip Jar: If you have a few bucks to chip in, it would be greatly appreciated. Thanks!