Connect the Dots: Here’s How We Became the ’99 Percent’

…and some things we can do to change it.

Deregulation enacted by Republicans and conservative Democrats, and an unprecedented Supreme Court decision allowing corporations the free speech the Founders intended only for flesh-and-blood human beings, led to the majority of Americans steadily sinking economically, as the nation’s wealth flowed to the top. Here are some simple demands to reverse this lethal course, along with a few suggestions of my own following the highlighted portion.

“The demands are pretty damned easy to summarize:

Here are my suggestions:

— End the corporate charter of any corporation that repeatedly or recklessly does harm to their customers or the environment.
— Revamp the rules regarding the appointment of boards of directors to corporations, making shareholder meetings more convenient to attend, or hold them online, and streamline voting procedures so that shareholders can more easily vote on the compensation packages of top executives and who will serve on the corporate board.
— End the practice of buying stock ‘on margin.’ (In other words, you must prove you have the money to pay for any stock you are buying.)
— Stricter enforcement of SEC regulations.
— Tax companies that outsource jobs or other assets overseas at a rate that will remove the profit in doing so.
— Tax offshored assets at the same rate domestic profits are taxed.
— Hold top executives responsible for a corporation’s criminal acts in the same way an individual American would be held responsible. (Example: If an executive approves a heart drug that his company’s internal studies say induces heart attacks, he or she would be as criminally liable as an individual who knowingly provided another person with a drug that caused a heart attack.)
— No corporation that sells equipment or electronics to the government will retain the right to secret proprietary codes or other information on their products.
— Finally, of course, we have to ban corporations from lobbying our government officials and limit the money spent in our elections.

But these suggestions are only a start; perhaps we should rethink the whole concept of the corporation as an entity for doing business as they have now become Too Big to Fail behemoths that threaten our right to life, liberty and the pursuit of happiness and our form of government, and many continue to exist only through taxpayer bailouts. As Ambrose Bierce put it more than a hundred years ago: “Corporation: An ingenious device for obtaining individual profit without individual responsibility.” It’s time we brought back responsibility to the marketplace.

Here’s a simplified version of President Franklin D. Roosevelt’s Second Economic Bill of Rights, proposed in 1944, which, if enacted, would solve a great many of our problems: 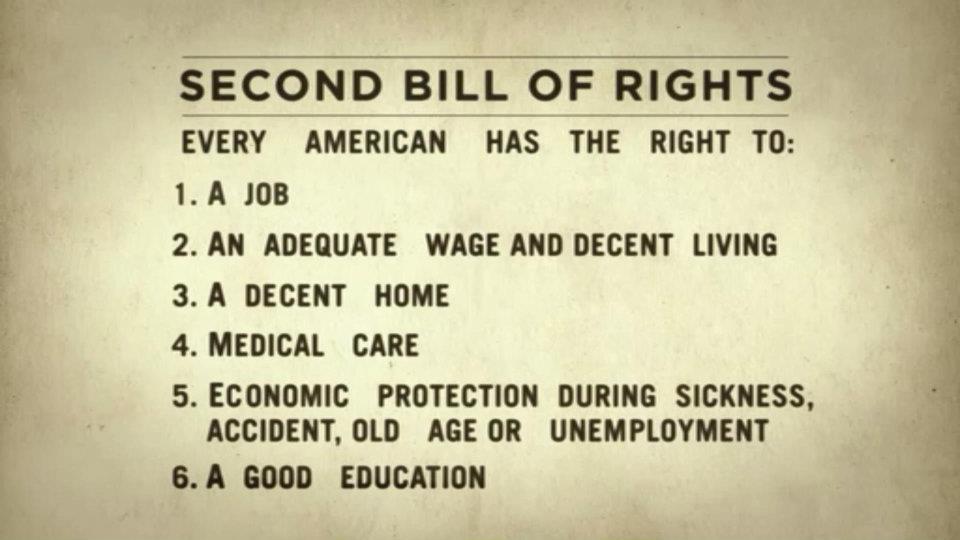