“It remains to be seen whether the Occupy Wall Street protests will change America’s direction. Yet the protests have already elicited a remarkably hysterical reaction from Wall Street, the super-rich in general, and politicians and pundits who reliably serve the interests of the wealthiest hundredth of a percent.” […]
“The way to understand all of this is to realize that it’s part of a broader syndrome, in which wealthy Americans who benefit hugely from a system rigged in their favor react with hysteria to anyone who points out just how rigged the system is.”
— Paul Krugman, “Panic of the Plutocrats,” New York Times, Oct. 9, 2011.

“My observation is that they [the 1 Percent] are very nervous that this might work. What sort of set me off on this … was making the mistake of watching Fox News in the morning the other day and watching these people, Varney and the others, mocking the protesters, making fun of the way they were dressed, saying they didn’t have a precise agenda. To which I said, you know they’re not filing briefs with the Supreme Court. They’re upset, and so my sense is there’s great fear that this sweet deal that a lot of people have in both Washington and New York, this unholy alliance between our government and our media, and the financial markets and the financial businesses, that this unholy alliance is finally being threatened and challenged. It is a threat and an attack on every working American, and it’s time that we upset the apple cart, and I think they are nervous and they know this has great potential.”
— Russ Feingold, appearing on “Countdown with Keith Olbermann,” Oct. 10, 2011.

“The term the one percent refers to people like Rush Limbaugh. This effort to define the Occupy movement as anti-Semitic illustrates how low the wealthy in this country are willing to go in order to discredit and destroy this movement. Make no mistake about it, this is a smear campaign that has its roots in fear.
“Even from his radio booth bubble, Rush Limbaugh can see what is going on. Limbaugh like his buddy Murdoch is getting scared and pulling out all of the meme stops in order to bring the protests down. Two of the biggest corporate media heavyweights are putting all of their power behind stopping the 99%, but they are losing.
“Despite their daily smears and pleas to the darkest demons in the American character, these protests continue to grow. Heavy handed police can’t stop them. The talking heads of America’s new Gilded Age aren’t making a dent, and corporate America is running scared.
“Keep it up and don’t stop. The assaults by Rush Limbaugh and Fox News are signs that they are terrified. You’ve got them on the run. For the first time in decades, the 99% is winning.”
— Jason Easley, “A Terrified Rush Limbaugh Mines the Gutter Of Anti-Semitism To Attack the 99%,” PoliticusUSA, Oct. 11, 2011.

“The media, the government, and Wall Street are all nervous. They are afraid of Occupy Wall Street. (The best media barometer of how the right wing and the corporatists are feeling is Fox News, and right now Fox absolutely reeks of fear).”
Jason Easley, “Russ Feingold Explains Why Govt, Media, and Banksters Fear Occupy Wall Street” PoliticusUSA, Oct. 10, 2011.

Oh, brother, the One Percent are getting mighty desperate if they’re trying this laughably ludicrous gambit by way of David “Bard of the 1 Percent” 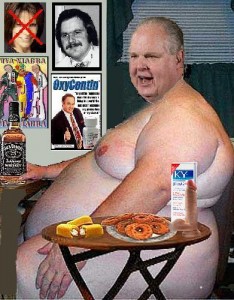 Brooks’ smearfest NY Times article and America’s Preeminent AM Radio Gasbag. One of the people Rush mentions as supporting the ‘anti-Semitic’ OWS is Rep. Jan Schakowsky (D-IL); Jan is Jewish. Russ Feingold, another strong supporter of the OWS, is also Jewish, along with many of the OWS protestors themselves. At the OWS New York protests, some twit had an anti-Semitic sign; the other protestors surrounded him and screamed at him until he left. BTW, non-Jews such as Romney, Bush, Cheney and Limbaugh himself are also part of the One Percent, not that Rush would want to remind his listeners of that inconvenient little fact. Here’s the Dittohead King lying his ass off once again and hoping some of it will stick with the MSM:

Here’s a quote from the supposedly ‘anti-Semitic’ 2004 Adbusters piece that was really about the Bush neocons warmongering Middle Eastern policy that mimics the Likudniks, the belligerent Israeli right-wing, not wealthy Americans who are Jewish. Of course, Rush knows his Dittoheads would never take the time to read the actual article he’s citing:

“Drawing attention to the Jewishness of the neocons is a tricky game. Anyone who does so can count on automatically being smeared as an anti-Semite. But the point is not that Jews (who make up less than 2 percent of the American population) have a monolithic perspective. Indeed, American Jews overwhelmingly vote Democrat and many of them disagree strongly with Ariel Sharon’s policies and Bush’s aggression in Iraq. The point is simply that the neocons seem to have a special affinity for Israel that influences their political thinking and consequently American foreign policy in the Middle East.”
— Kalle Lasn, “Why Won’t Anyone Say They Are Jewish?” Adbusters, March/April 2004.

Here, Wikipedia covers the bogus charges of anti-Semitism against Adbusters.