Herman Cain a Failure as Head of Godfather’s Pizza Chain

…and this is what he wants to do to the country as president? We’ve already had one dismal ‘CEO presidency’ with Junior Bush — do we need another one?

As Jay Raskin points out in the piece below, the MSM have not checked out Cain’s claims that he was a successful CEO of the Godfather’s Pizza chain, and he has not released the firm’s profit and loss statements. Since Cain’s running for president on his prowess in business, shouldn’t he divulge how well his corporation did under his 15 years as its head? Here’s an excerpt from Raskin’s article on the sales figures: 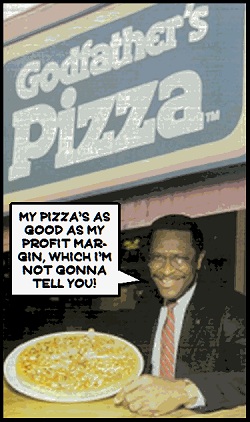 “If we look at sales figures which are in the public record, sales at Godfather’s Pizza, adjusted for inflation, dropped over 40% from the year before he took over to his final years. It is hard to imagine that profits went up at this time. Godfather’s Pizza fell from the 5th largest Pizza chain when Cain took over to the 11th largest Pizza chain by the time he left the company 15 years later.” […]
“Cain was unable to produce any profits in the years he was CEO at Godfather’s pizza. In other words, it was a fraud scheme that failed due to Cain’s inept management.
“If you want to see the poor Godfather’s Pizza sales figures for Cain during his reign there, … click here.
“Please have reporters ask him to release his profit and loss statements during his years at Godfather’s, so we can judge his often repeated myth/claim that he was a great manager.”
— Jay Raskin, “Herman Cain’s Failure as CEO of Godfather’s Pizza,” Op-Ed News, June 11, 2011.