Fox News Fails to Stunt the Growth of the OWS Movement 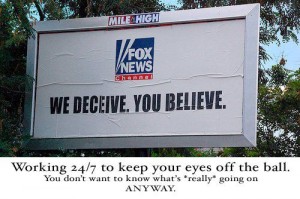 Students of the US mass media already know that Fox News puts the ‘crap’ in ‘crapulent,’ as in you have to be drunk to believe the incredible amount of propagandistic slag — misdirection, guilt by association, half-truth and outright deception — that emanates daily from Roger Ailes’ neoconservative cable megaphone disguised as a useful outlet of unbiased information. But Roger’s pet monkey is losing audience as economic reality worsens for the benighted ignorati that still take Fox’s Red River of pig slurry seriously. After all, it wasn’t the ‘dirty hippies’ or socialists or ACORN that is foreclosing on their homes, cutting their pensions, and shifting their jobs overseas — it’s Roger’s pals on Wall Street and in the corporate suites of America. Adding to that, Big Boss Rupert Murdoch is having his problems, both with Fox News parent News Corp. investors wanting to dump him, and the UK government out to prosecute him since he severely antagonized Queen Elizabeth II by illicitly spying on her relatives. But then the final slap in the kisser happened as, according to a Fox poll, a majority of Fox News viewers agree with the OWS Movement the Foxifiers had spent weeks trying to ridicule and vilify out of existence. It must be as jarring a prospect to Roger as human eyes witnessing his bulk stuffed into nothing but a skimpy Speedo, the idea that a large chunk — 69 percent — of the bottom-feeders Fox caters to have finally woken up to who’s at fault for their misery. The worm, so to speak, has turned.

Boy, that’s gotta hurt — all that ‘good’ propaganda down the drain. But that poll was from Oct. 7th; surely things have changed since then? No, as Mark Howard outlines, the Fox sleaze and slime directed against OWS still isn’t working.

Another day, another Fox News attempt to smear the Occupy Wall Street movement.

Fox News has been feverishly trying to dampen the viral growth of OWS ever since the movement sprouted in a park in Lower Manhattan about a month ago. Fox’s overt hostility is in sharp contrast to the love affair they had with the Tea Party. Now Fox is slandering decent and passionate protesters as communists, whining about class war, comparing them to hippies, accusing them of violence, and associating them with Nazis. All of these attacks have collapsed from the weight of their own dishonesty, and support continues to grow for the movement. But does that stop Fox News? […]

“Despite this barrage of hogwash, the Occupy movement continues to gain popularity. A CBS/New York Times poll shows that 43 percent of the country agree with the Occupiers. Even more significant is the support expressed for the movement’s economic justice agenda, particularly raising taxes on the wealthy. A Bloomberg poll shows overwhelming support by 68 percent of the American people, including a majority of both independents and Republicans. And poll after poll affirms those results.”

Speaking of hippies, here’s an excerpt from a 2007 Mark Morford article that’s relevant to the 99 Percenters in the streets today — turns out, the ‘hippies’ of the ’60s were right!

“[Being a hippie] was, always and forever, about connectedness. It was about how we are all in this together. It was about resisting the status quo and fighting tyrannical corporate/political power and it was about opening your consciousness and seeing new possibilities of how we can all live with something resembling actual respect for the planet, for alternative cultures, for each other. You know, all that typical hippie crap no one believes in anymore. Right?”
— Mark Morford, “The Hippies Were Right!” San Francisco Chronicle, May 2, 2007.