Today’s Quotes: OWS and the 99 Percent 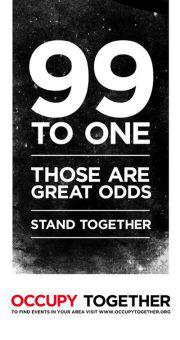 “Yes, we are the 99%. We will never agree on every detail of what that means but, then again, we’re not supposed to. What we do all agree on is that we’re at the end of our patience and are sick and tired of the 1% treating us like slaves and cattle.”
— Sam Uzi, “How Do You Know When A Politician Is Lying?” AddictingInfo.org, Oct. 20, 2011.

“America has reached a turning point. Occupy Wall Street, after only a month, has gained global attention and unstoppable momentum. It is no longer up to the system’s political power-brokers, whose incompetence was on full display during this summer’s manufactured debt-ceiling crisis. Nor is it up to the system’s titans of finance, industry or capital. If those groups want to have a say in what the future holds, they’ll eventually be forced to come to the occupations themselves, and meet with ordinary Americans on their own terms.”
— Carl Gibson, “The Elite Are Trembling in Their Boots,” Reader Supported News, Oct. 18, 2011.

This entry was posted in 1 Percent, 99 Percent, Corporations, Corruption, Economy, New Ideas, OWS Movement, Politics, Quotes, Republicans, Wall Street and tagged AddictingInfo.org, Carl Gibson, OccupyTogether.org, OccupyWallSt.org, Reader Supported News, Sam Uzi, We Are The 99 Percent. Bookmark the permalink.
Tip Jar: If you have a few bucks to chip in, it would be greatly appreciated. Thanks!