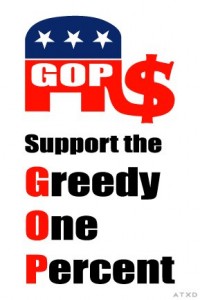 Frank Luntz is the uber-propagandist Republican word-snake who gave us such gems as ‘death taxes’ for estate taxes that solely affect the wealthy; ‘death panels’ for medical advisors to elderly patients; and ‘clean air act’ for legislation that does just the opposite, among other deplorable political misnomers. Now Luntz has certified the true impact of the OWS Movement — he’s “frightened to death” of it.  Here, courtesy of Think Progress, are the Talking Points you’ll be hearing soon from the Praetorian Guard of the One Percent otherwise known as the Republican Party.  Play a game and, every time you hear a Luntz euphemism, insert the real word out loud; take a drink if you can get through one interview with a Republican without hearing a single Luntzism. BTW, note below that the majority of those tested by Luntz think capitalism is immoral. In it’s current sociopathic multinational-corporate Wall Street form, it certainly is. They also don’t trust the GOP to defend the middle-class — not suprising since the Repubs have made an obsession of ignoring it, when they aren’t busy cutting its pensions and jobs. (Do I smell a Dem landslide next year?) Glad the public is finally catching up to these facts.

The Republican Governor’s Association met in Florida this week and featured pollster Frank Luntz, who offered a coaching session for attendees about how they should communicate to the public. Yahoo! News’ Chris Moody was there, and captured some of Luntz’s comments on Occupy Wall Street.

Luntz told attendees that he’s “scared of this anti-Wall Street effort. I’m frightened to death.” The pollster warned that the movement is “having an impact on what the American people think of capitalism.” So the pollster offered some advice for them about how to fight back. Here’s a few snippets of what he said, according to Moody:

– Don’t Mention Capitalism: Luntz said that his polling research found that “The public…still prefers capitalism to socialism, but they think capitalism is immoral. And if we’re seen as defenders of quote, Wall Street, end quote, we’ve got a problem.”

– Empathize With The 99 Percent Protesters: Luntz instructed attendees to tell protesters that they “get it”: “First off, here are three words for you all: ‘I get it.’ … ‘I get that you’re. I get that you’ve seen inequality. I get that you want to fix the system.”

– Don’t Say Bonus: Luntz told Republicans to re-frame the concept of the bonus payment — which bailed-out Wall Street doles out to its employees during holidays — as “pay for performance” instead.

– Don’t Mention The Middle Class Because Americans Don’t Trust Republicans To Defend It: “They cannot win if the fight is on hardworking taxpayers,” Luntz instructed the audience. “We can say we defend the ‘middle class’ and the public will say, I’m not sure about that. But defending ‘hardworking taxpayers’ and Republicans have the advantage.”

– Don’t Talk About Taxing The Rich: Luntz reminded Republicans that Americans actually do want to tax the rich, so he reccommended they instead say that the government “takes from the rich.”

Frank Luntz is no minor pollster. He is considered to be one of the top political communications experts in the world, having provided consulting to many of the world’s top corporations, politicians, and special interest groups. That Luntz is admitting the impact of Occupy Wall Street and the 99 Percent and telling closed-door meetings of Republicans that it frightens him is a huge victory for the movement.

This entry was posted in 1 Percent, 2012 Election, 99 Percent, Conservatives, Corporations, Corruption, Democrats, Economy, Idiots, Media, OWS Movement, Politics, Republicans, Teabaggers, Wall Street, Wingnuts and tagged Frank Luntz, Scared GOP, ThinkProgess.org, We Are The 99 Percent, Zaid Jilani. Bookmark the permalink.
Tip Jar: If you have a few bucks to chip in, it would be greatly appreciated. Thanks!