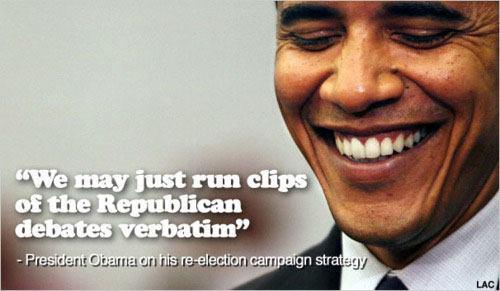 If so, it would be a good one. Just run clips of the mental midgets and moral reprobates in the GOP presidential field attacking each other for their outrageous lies and rank hypocrisy and let it sink in.  If you wanted to season things up a little, toss in some “Give ‘Em Hell Harry” sauce (see below). The result would be a landslide that would show up on the Richter scale, but is Obama ready for the political trench warfare this kind of campaign requires? Have no doubt the Republican candidate, whoever it may be, will have only negative attacks to hurl at Obama, funded anonymously by wealthy ‘Citizens United’ corporations and fat cats.  The GOP has no real plan that will create jobs or help most Americans– certainly cutting taxes for the wealthy, deregulating Wall Street further, destroying or privatizing social programs, starting a war with Iran, and enacting every crapshit crazy notion of the Religious Right will do nothing to improve the economy, and I think they know this, but just don’t care. 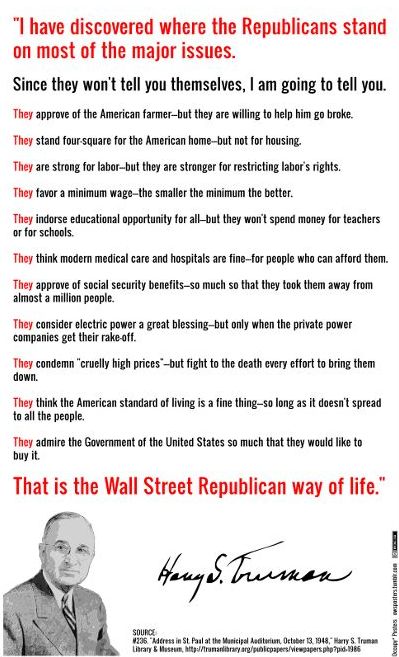 This entry was posted in 1 Percent, 2012 Election, 99 Percent, Christopublicans, Conservatives, Corporations, Corruption, Democrats, Economy, Obama, Politics, Religion, Republicans, Teabaggers, Wall Street, Wingnuts and tagged GOP Hypocrisy, Harry Truman, Iran, Lies. Bookmark the permalink.
Tip Jar: If you have a few bucks to chip in, it would be greatly appreciated. Thanks!