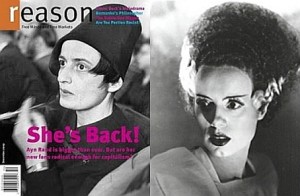 And vice-versa. The primary thing in politics is to maintain your skepticism and pragmatism. The current version of the Republican Party have abandoned both, when they are being fed what they want to hear, and cling to ideas both woefully archaic and provably tattered with failure. Presently, they seem to believe that if they build a high enough pile of manure, a pony will magically appear. That kind of thinking inevitably leads to defeat and extinction. Ironically, many Republicans who call themselves Christians eagerly embrace the philosophy of Ayn Rand, an avowed atheist. Of course, the GOP Elite are not Christians, they are well-heeled grifters picking the pockets of the sheep and hewing to Randian ‘principled selfishness’ as a self-serving convenience to make themselves wealthier.

“Still, the mystery of Atlas Shrugged isn’t why is it so bad? Many books are this bad and some are even worse. No, the mystery is, why does anyone who made it out of eighth grade take it seriously?

“Yet, obviously, people do. Individuals capable of dressing themselves apparently love this, one of the most turgid, contrived, pompous, and comically over-written books ever published in English. Why?

“Because they believe. For Randroids, ‘glibertarians,’ ‘conservatives’ (whatever that means at this point) and Republicans in general, politics has become a matter of faith.” […]

“Faith not only requires you to ignore what happens in the world, it praises you for it. The more unsubstantiated, untenable, or preposterous the belief, the more virtuous the believer. So [The Wall Street Journal’s] Stephen Moore’s solution to global recession is to wave around one of the most unreadable books ever written as though it were holy writ. For him, and for the right, politics is now religion.

“And, as with any mythology, believers want to emulate their heroes. Cable traffic on the wing-nut sites after the last election featured many writers and commenters musing about ‘going John Galt,’ withdrawing their genius and talents from the rest of us and leaving us to our own moocherly devices. To which all one can reply is, Please do. Knock yourselves out. And take this hideous book with you.”
— Ellis Weiner, “On ‘Atlas Shrugged’ as a Guide to our Times,” Huffington Post, Jan. 12, 2009

This entry was posted in 1 Percent, 2012 Election, 99 Percent, Conservatives, Corruption, Economy, Idiots, Politics, Quotes, Religion, Republicans, Teabaggers, Wingnuts and tagged Atlas Shrugged, Ayn Rand, Ellis Weiner, Libertarians, Republican Scam. Bookmark the permalink.
Tip Jar: If you have a few bucks to chip in, it would be greatly appreciated. Thanks!