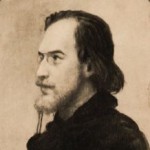 French composer Erik Satie (1866 – 1925) is an acquired taste and either you like him or hate him, but there is no denying his impact on modern music, not only classical, but jazz, as well. His sparse, languid piano compositions, what some refer to as ‘mysterioso’ music, influenced everyone from John Cage to Miles Davis. The first video below, Satie’s “Gnossienne No. 1,” you’ve probably heard in the background of some film or TV show, but it stands alone as a nice piece of music. Try to relax and listen.

And here are Satie’s ‘Trois Gymnopedies,” composed about 1888, and still sounding fresh today:

This entry was posted in Jazz, Music, Video and tagged Classical Music, Erik Satie, Gnossienne No. 1, Piano, Trois Gymnopedies. Bookmark the permalink.
Tip Jar: If you have a few bucks to chip in, it would be greatly appreciated. Thanks!