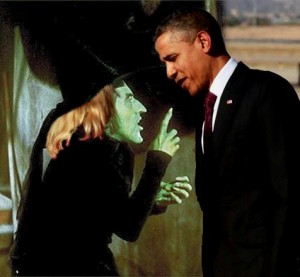 Jan Brewer, the truly horrible woman who is the present Republican Governor of Arizona, is using her little finger-pointing stunt to raise money for her reelection campaign and and sell her book.  Apparently Brewer doesn’t realize how loathed she is by everyone but the minority of bitter white racists in her state; even business interests, which have lost billions in tourist dollars and cancelled convention trade thanks to her embarrassing SB1070 “Show me your papers” law, will be opposing her reelection. Add to that the energized and fast-growing number of Hispanic voters who will be eager to dump Brewer, and you have the recipe for a landslide for her Dem opponent.  Obama nearly won the state in 2008; he may succeed this year.  Here’s Brewer’s cheesy fundraising letter, from her official JanPAC website:

I need your help!

When I met President Obama this week, I really wasn’t pointing at him. I was telling him, “You have ONE more year!” The President needs to be reminded that he is the President of the FEDERAL REPUBLIC and not a KING lording over state governors.

While I wanted to talk to him about jobs, our economy and visiting our border, President Obama criticized my book, Scorpions for Breakfast, and then walked away from me.

We deserve results over rhetoric, but this is a President who had the audacity to sue me and Arizona in my efforts to protect our country from illegal immigration!

Donate today to Jan PAC and help me stop President Obama in 2012 and others like him who are taking our country down the wrong path.

Thank you for your support,

This entry was posted in 2012 Election, Bizarre But Real, Conservatives, Corruption, Democrats, Idiots, Obama, Republicans, Teabaggers, Wingnuts, WTF? and tagged Arizona, Finger Pointing, Jan Brewer. Bookmark the permalink.
Tip Jar: If you have a few bucks to chip in, it would be greatly appreciated. Thanks!