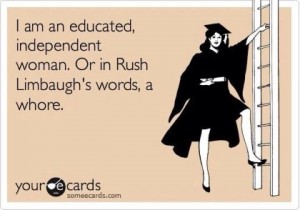 Think Progress reports that 34 advertisers have now cancelled their advertising on ‘The Rush Limbaugh Show’ yet Godzilla continues to dig himself a deeper hole with comments like this: “What is it with all of these young, single, white women, overeducated — doesn’t mean intelligent.” Yeah, thanks for memories, Rush — or not.

Limbaugh’s death wish is mirroring the Republican Party’s in general — Rush apparently believes he can find new advertisers to replace the national brands that have abandoned him. just as the Republicans, as their party shrinks, seem to think they can discover new voters to replace all the groups they’ve offended. They’re both over-the-edge, break-out-the-straight-jacket, foaming-mouth mad.

As we wrapped yesterday’s Progress Report, the number of advertisers bailing on Rush Limbaugh’s show in the wake of the growing furor around his vitriolic, sexist attacks on Sandra Fluke totaled 12. As of right now, nearly triple that number of advertisers have announced plans to drop advertising on the show.

Those leaving today range from majors brands like Capital One and J.C. Penney to a local energy company in Maine, Downeast Energy. Another major brand, Netflix, also dropped its advertising today after receiving more than 160,000 petitions gathered by UltraViolet.

The current number of advertisers telling Rush Limbaugh enough is enough stands at 34.

Check out our Pinterest board for a look at those who have stood up to Limbaugh’s outrageous views on women.

On today’s show, Limbaugh did not back off his sexist attacks. As noted by ThinkProgress’ Alex Seitz-Wald, during a lengthy screed against a new book on the American food system by author Tracie McMillan, Limbaugh asked, “What is it with all of these young, single, white women, overeducated — doesn’t mean intelligent.”

If you haven’t yet taken the opportunity to do so, please sign our petition to send the message that enough is enough and that you stand with Sandra Fluke.

See the article for full links.

This entry was posted in 2012 Election, Cartoon, Christopublicans, Conservatives, Idiots, Republicans, Teabaggers, Wingnuts, WTF? and tagged Advertiser, GOP War on Women, Rush Limbaugh, Sandra Fluke, ThinkProgess.org, Whore. Bookmark the permalink.
Tip Jar: If you have a few bucks to chip in, it would be greatly appreciated. Thanks!