Wave that big foam finger around — we’re No. 1 in national debt at $14.3 trillion; No. 1 in oil usage at about 19 million barrels per day (with China a lame second at 8 million);  No. 1 in executive compensation, with US CEOs hauling in 343 times the amount paid to the average worker; No. 1 in the number of prisoners in jail at approximately 2 million compared to second-place China with only 1.5 mil; but, surprisingly, we’re only No. 4 in the number of murders by firearm — I think with a Tea Party President in 2012, we can improve in that category. (The previous stats were culled from NationMaster.com and SEIU.org.) 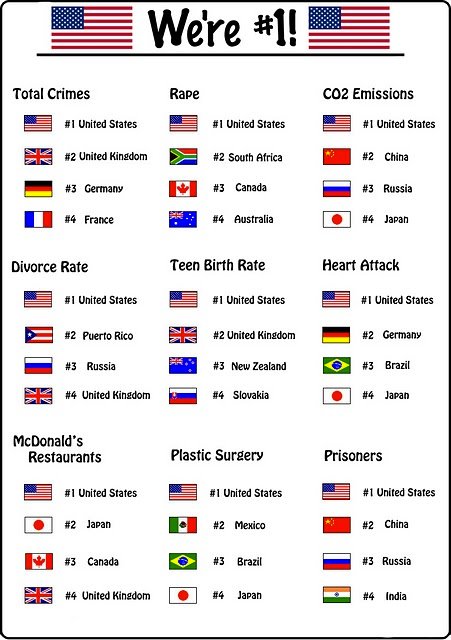 H/t to Suburban Guerrilla for the above chart.

But that’s not all we’re No. 1 in — how about military spending: …and lowering taxes on the wealthy: ‘s what your tax dollar pays for:

(I think we’re also likely No. 1 in the number of dumb politicians, but I couldn’t find a chart for that.) So stick out your chest — look at all we have to fill us up with pride!

This entry was posted in Christopublicans, Democrats, Economy, Global Politics, Politics, Republicans, Teabaggers, Wall Street, Wingnuts and tagged Executive Pay, Healthcare, Military Spending, No. 1, Taxes, World Stats. Bookmark the permalink.
Tip Jar: If you have a few bucks to chip in, it would be greatly appreciated. Thanks!