… and El Rushbo, in a demonstration of ‘thou doth protest too much’ and typical empty bravado, dismisses this mass exodus as nothing, a “couple of french fries” missing from the bag. This is the same blowhard who just a few days ago was denying any sponsors had left his show, although more than 20 had cancelled. Hint to Limbaugh: radio stations around the country are not going to hang onto a three-hour daily talk show they can’t sell ad time on and I can’t think of what company would want its name associated with Limbaugh’s seedy little show at this point. Good riddance, Rush — you’re just another victim of the ‘free market’. See you on Fox Business Network soon, a channel nobody ever watches, including me. 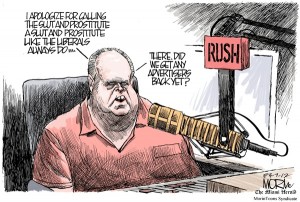 Rush Limbaugh: Loss of Ads Amounts to “A Couple of French Fries”

The flight of advertisers from “The Rush Limbaugh Show” continued Wednesday, with a total of 45 national and local companies pulling their spots, according to the liberal activist groups angered by the talk radio host for calling Georgetown law student Sandra Fluke a “slut” and a “prostitute.”

Talk show host Rush Limbaugh sought to reassure listeners Wednesday after the tally of local and national companies that have pulled their advertisements from his time slot topped 40, insisting that the show will go on and that the program is not losing revenue from the exodus.

Media Matters has compiled the following list of companies advertising on The Rush Limbaugh Show as compiled from the program’s WABC airing, as well as companies who have announced that they will no longer advertise on the show in the wake of his misogynistic attacks on Sandra Fluke. As many stations that carry the show air ads from local companies, this list should not be considered comprehensive.

AS OF TODAY, 45 ADVERTISERS HAVE CANCELED THEIR ADS RUNNING DURING THE RUSH LIMBAUGH SHOW.