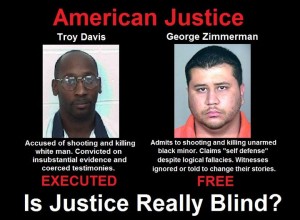 Why some righties want to defend nutjob George Zimmerman is beyond me, but the typical right ‘smear the victim’ campaign has started. Here, Zimmerman’s lawyer says he was attacked and beaten by Trayvon and sustained a broken nose — gee, if that’s true, why didn’t Zimmerman immediately go to the hospital for treatment and he’d have forensic evidence of such an attack?

Craig Sonner, the attorney for George Zimmerman, revealed a new allegation into the Trayvon Martin case Friday evening that, claiming his client suffered injuries at the hands of the slain 17-year-old.

In an interview with CNN’s Anderson Cooper, Sonner was asked if he could identify any injuries Zimmerman suffered on the night he shot and killed Martin. Sonner said that he believed Zimmerman’s nose was broken and that the back of his head also had lacerations before describing what his client told him.

When reading this, keep in mind that originally Zimmerman told the police “he had stepped out of his truck to check the name of the street he was on when Trayvon attacked him from behind as he walked back to his truck.” Perhaps realizing that was a pretty lame excuse considering he patrolled the area constantly, he has apparently dropped that reason for leaving his car. Why did he get out of his truck after reporting the ‘suspicious character’ to the police? Who knows — maybe he couldn’t get good aim from inside the vehicle.

George Zimmerman, the [self-appointed] neighborhood watch crime captain who shot dead 17-year-old Trayvon Martin, originally told police in a written statement that Martin knocked him down with a punch to the nose, repeatedly slammed his head on the ground and tried to take his gun, a police source told ABC News.

Zimmerman had claimed he had called police about Martin, whom he found suspicious, then went back to his car when Martin attacked him, punching him.
— Matt Gutman, “Trayvon Martin Shooter Told Cops Teenager Went For His Gun,” ABC News, March 26, 2012.

Then there are the new allegations that Trayvon was suspended from school for having an ’empty baggy’ of marijuana. (If it was empty, how do you know it contained marijuana? Did the school do a microscopic drug test on the bag?) Moreover, even if Trayvon smoked pot, what difference does that make, except he would tend to be less prone to violence? Oh, yeah — in the right-wing Universe of Fear it means he deserves to die because he’s a young black male junkie.

Meanwhile, you won’t hear Trayvon’s smearers bring up the much more important info that Zimmerman was arrested in July of 2005 for battery of a police officer and violently resisting arrest, the charges later dropped. You can bet if Trayvon had been arrested on such charges, it would be blared across Fox News like the Second Coming.

For a timeline of events in the Trayvon Martin murder from ABC News, go here.