For those who may not know or recall much about one of the greatest public liars and frauds this nation has ever elected to power.

From the Joe McCarthy bio at Spartacus Educational: 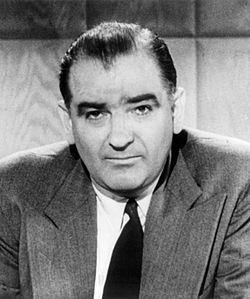 Joseph McCarthy was born on a farm in Appleton, Wisconsin, on 14th November, 1908. His parents were devout Roman Catholics and Joseph was the fifth of nine children. He left school at 14 and worked as a chicken farmer before managing a grocery store in the nearby town of Manawa.

McCarthy returned to high school in 1928 and after achieving the necessary qualifications, won a place at Marquette University. After graduating McCarthy worked as a lawyer but was fairly unsuccessful and had to supplement his income by playing poker.

McCarthy was originally a supporter of Franklin D. Roosevelt and the New Deal. However, after failing to become the Democratic Party candidate for district attorney, he switched parties and became the Republican Party candidate in an election to become a circuit court judge. McCarthy shocked local officials by fighting a dirty campaign. This included publishing campaign literature that falsely claimed that his opponent, Edgar Werner, was 73 (he was actually 66). As well as suggesting that Werner was senile, McCarthy implied that he was guilty of financial corruption.

When the United States entered the Second Word War McCarthy resigned as a circuit judge and joined the U.S. Marines. After the war McCarthy ran against Robert La Follette to become Republican candidate for the senate. As one of his biographers has pointed out, his campaign posters pictured him in “full fighting gear, with an aviator’s cap, and belt upon belt of machine gun ammunition wrapped around his bulky torso.” He claimed he had completed thirty-two missions when in fact he had a desk job and only flew in training exercises.

In his campaign, McCarthy attacked La Follette for not enlisting during the war. He had been forty-six when Pearl Harbor had been bombed, and was in fact too old to join the armed services. McCarthy also claimed that La Follette had made huge profits from his investments while he had been away fighting for his country. The suggestion that La Follette had been guilty of war profiteering (his investments had in fact been in a radio station), was deeply damaging and McCarthy won by 207,935 to 202,557. La Follette, deeply hurt by the false claims made against him, retired from politics, and later committed suicide.

On his first day in the Senate, McCarthy called a press conference where he proposed a solution to a coal-strike that was taking place at the time. McCarthy called for John L. Lewis and the striking miners to be drafted into the Army. If the men still refused to mine the coal, McCarthy suggested they should be court-martialed for insubordination and shot.

McCarthy’s first years in the Senate were unimpressive. People also started coming forward claiming that he had lied about his war record. Another problem for McCarthy was that he was being investigated for tax offences and for taking bribes from the Pepsi-Cola Company. In May, 1950, afraid that he would be defeated in the next election, McCarthy held a meeting with some of his closest advisers and asked for suggestions on how he could retain his seat. Edmund Walsh, a Roman Catholic priest, came up with the idea that he should begin a campaign against communist subversives working in the Democratic administration.

Read the rest and get links to above excerpt here.

This entry was posted in Bizarre But Real, Christopublicans, Conservatives, Democrats, Idiots, Politics, Religion, Republicans, Teabaggers, Uncategorized, Wingnuts and tagged Biography, Communism, GOP Fraud, Liar, Sen Joseph McCarthy. Bookmark the permalink.
Tip Jar: If you have a few bucks to chip in, it would be greatly appreciated. Thanks!