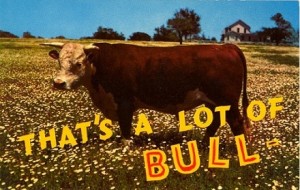 So-called ‘journalist’ Wolf “Larsen” Blitzer browbeats an apology to Ann Romney out of CNN colleague Hilary Rosen for telling the truth (read her full comment), apparently completely unaware that his paternalistic attitude is one of the things that most women object to — bullying by an arrogant clueless jerk. Incidentally, this is the same Wolf Blitzer who told a DC radio host that he knew there wasn’t any WMD in Iraq during the Bush ramp-up to the Iraq invasion and failed to disclose that little fact to his CNN audience. Now he speaks up for Ann Romney’s supposed ‘hard work’ in raising five sons and denigrates Hilary Rosen by treating her like an errant school girl who has refused to sufficiently apologize for talking in class. Gee, Wolf, how manly of you, in the sense of not exhibiting a shred of decency or respect for women. Raising five boys may have been hard on Ann Romney, but I’m sure it was made easier by the household staff the Romney’s could afford to hire, a luxury most American woman with kids would be glad to enjoy. Meanwhile, Republicans vote against child care, or anything else, for working mothers; mothers who must work to put food on the table, the kind who don’t have a ‘choice’ to stay at home or go to work. If she really cares about working moms beyond a cheap talking point, Ann Romney should count her blessings and dedicate herself to improving conditions for working moms, and all women, by convincing her husband and her political party to do more for them. Sure she will. (I won’t hold my breath.)  Watch the video from Current TV’s “The Young Turks with Cenk Uygur” below: