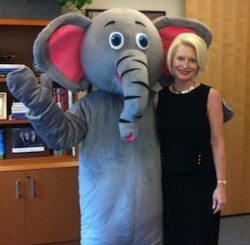 “I have six times as many Twitter followers as all the other candidates combined, but it didn’t count because if it counted I’d still be a candidate; since I can’t be a candidate that can’t count.”
— Newt Gingrich, whining in August of 2011 that the media was ignoring his massive Twitter following, which at one point supposedly numbered over 1.3 million people. It turned out 90 percent of those dedicated ‘followers’ were fakes, phony names provided by a firm the Gingrich campaign hired to make him look popular. This little anecdote summarizes the bottomlessly deceptive and slimy thing that is Newt.

”She’s not young enough or pretty enough to be the wife of a president. And besides, she has cancer.”
— Newt Gingrich in 1980, telling a friend the reasons he was divorcing his first wife.

“Newt Gingrich is so pro-marriage, he can’t stop doing it. He is so morally upright, that he’s only had sex after he was married. Just not always to the woman he was married to.”
— Stephen Colbert

”I have two grandchildren — Maggie is 11, Robert is 9. I am convinced that if we do not decisively win the struggle over the nature of America, by the time they’re my age they will be in a secular atheist country, potentially one dominated by radical Islamists and with no understanding of what it once meant to be an American.”
— Newt Gingrich, March 2011

“Newt Gingrich said he’s afraid America will become an atheist country dominated by radical Islamists. Right. Our big problem could be religious atheists, almost as bad as pacifist warmongers. If they hook up with the communist capitalists we’re screwed.”
— Jay Leno

”There’s no question at times of my life, partially driven by how passionately I felt about this country, that I worked far too hard and things happened in my life that were not appropriate.”
— Newt Gingrich in 2011, weaseling as only Gingrich can on why he cheated on his first two wives.

“In a new interview, Newt Gingrich says he cheated on two of his wives because he was too consumed with love for his country. Yeah, apparently he misunderstood the phrase, ‘Please rise for the Pledge of Allegiance.'”
— Conan O’Brien

“It’s his last round-up, his last rodeo (in which he’s played the clown), his last hurrah, his last campaign. White-haired Newt Gingrich, at 68, has so much mud stuck to him after this final effort at the presidency that he will never be remembered as anything more than the national political joke he’s always been. Many in the media start laughing just at the mention of his name. He’s now a pundit punchline, calling up images of slimy charge-account jewelry, a silly elephant costume, sleazy marital hypocrisy and slaphappy moon bases.”
— Max Publico