The ‘Duh’ Factor: Would Rubio Be Romney’s Palin? 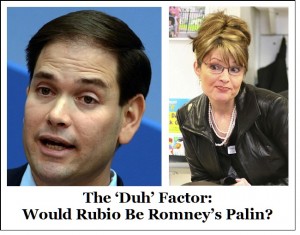 Sure, on paper, descendant of Cuban immigrants Sen. Marco Rubio (R-Fla.) would seem to be Mitt Romney’s perfect pander to the Hispanic community, a group with which President Obama holds a tremendous lead, according to the latest polls. (Although those of us who have Latino friends, which I doubt Mitt has, know that there is some friction between Cubans, Puerto Ricans and Mexicans, and most Hispanic voters in this country are of Mexican ancestry.)  Since Romney has already lost women voters — a recent Wall Street Journal/NBC poll finds him attracting only 28 percent of female voters — and the youth vote, as well as blacks and other minorities, his only possible path to victory is hoping he can hold together the GOP base, combined with suburban whites and at least half of the Hispanic vote, and that disaffected Democrats will stay home or vote third party.  A tall order, akin to surmounting Mt. Everest in a jogging suit barefoot and surviving. (Even the right-wing rag The Washington Times doesn’t think Mitt can win.)  Still, if there’s a way to pander, Mitt will embrace it, just as he has shamelessly pandered to the bizarre right during the primaries, flip-flopping on every issue he previously ‘held dear.’ But there is also Romney’s harebrained proposal to ‘save’ the economy which, once you cut away the puffery and chaff, is exactly what Junior Bush did in the early part of the 21st century that resulted in a massive economic collapse in 2008, only Mitt’s plan is even worse. (To Romney, really bad ideas are worth overdoing if it puts more money in the pockets of him and his wealthy pals. What about the American economy? Who cares — Mitt has most of his money banked overseas.)

But there is this unexpected fly in empty-suit Romney’s brown-noser salve — what if Rubio turns out to be just as feckless as Sarah Palin? The warning signs are there: Rubio recently lost the last page of his ‘major speech’ on foreign policy and couldn’t ad lib a few miuntes on the subject. What politician, speaking on a topic that he or she understands and cares about, could not find words to finish out a talk other than the lame, “I left my last page of the speech. Does anybody have my last page”? (This from a guy who has gone snarky over Obama using a TelePrompter.)  Combine this Shallow Hal with a clueless Gaffe Machine like Romney and you have a landslide victory for Obama. Note to Mitt: Rubio would be perfect as your running mate– why wait, name him now.

It’s hard not to recognize the similarities between Sarah Palin and Florida Sen. Marco Rubio, whose name is routinely brought up among the frontrunners for the vice-presidential slot on Mitt Romney’s ticket, says John Dickerson at Slate. Just like Palin, Rubio is young and charismatic, boasts crossover political appeal, “successfully bucked his party establishment,” and is a talented campaigner. But as Romney and Rubio tour the country together — and fuel VP speculation — we’re getting a closer look at a less-desirable quality the 40-year-old senator shares with “this election’s Sarah Palin”: Lack of experience. As the veepstakes continue, do the comparisons to Palin work for — or against — Rubio?

Rubio is like Palin, and he’s a bad VP pick: Palin didn’t have enough experience in ’08, and Rubio doesn’t have enough now, says Dickerson. “Mitt Romney is the candidate of executive experience.” He sells himself as a successful businessman with a decades-long record of making tough decisions, while casting Obama as a neophyte. But the boyish senator from Florida has no leadership chops. How is Mitt going to convince voters that Obama is too naive to do the job, but Rubio could step in and be president at a moment’s notice?

And, from The Atlantic, a list of Rubio’s spotted past of shady financial dealings and odd personal relationships:

The Oppo File on Marco Rubio: Why He’s an Unlikely Veep Pick

Despite repeatedly denying interest in the job, Marco Rubio remains at or near the top of nearly every speculative list of who Mitt Romney might choose as his running mate. Other candidates are seen as strong but flawed contenders — Rob Portman is steady but dull; Paul Ryan a dynamic proponent of unpopular ideas — but the first-term Florida senator is spoken of in rhapsodic terms. He’d provide the Romney ticket with youth and charisma, Tea Party credentials, and sway in the critical swing state of Florida — not to mention being the first Hispanic to sit on a major party ticket.

Overlooked in this is Rubio’s big Achilles’ heel: his record. Not his legislative record — though Democrats would surely take great pains to paint him as an extremist, he tends to be in the mainstream of the GOP — but his political and lifestyle ones. Those areas will give opponents plenty to work with. There’s no single smoking gun — the lone revelation that would make him unviable. Instead, his record raises a series of smaller questions that would add up to many potential headaches for a campaign headed into a tough election against an incumbent president. The case for Rubio is well known, but here’s a quick rundown on his potential vulnerabilities.