Wordy-Gurdy: Where Did the Term ‘Piss Poor’ and Other Common Clichés Originate? 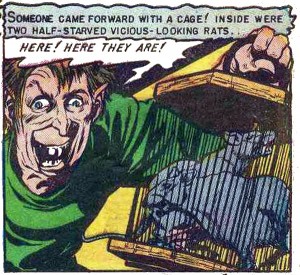 According to this, they came from the Middle Ages and, more specifically, Ye Olde England. Some of the information below is confirmed, other data may be taken with a ‘pinch of salt.’

In those days, hide tanners used urine to tan and soften animal skins, so it was common for families to urinate in a pot and save it. Then, once every day or two, the pot of urine was sold to the tannery and, if you did this to survive, you were known as ‘piss poor.’

Worse than that were the poorest of the poor who couldn’t even afford to buy a pot; in other words, they were so broke they ‘didn’t have a pot to piss in.’

The etymology of some other common phrases:

The custom of June weddings began because most people took their yearly bath in late May and they still smelled pretty good in June when it was warmer and easier to travel. However, since they were just starting to stink, brides carried a bouquet of flowers to filter out the body odor of themselves and their guests on their ‘special day.’ (The better-off used perfumed handkerchiefs for this purpose; this led to the widespread use of perfume by women four centuries later, even though the original purpose had been lost.) Some still honor that tradition today by carrying a bouquet when getting married and then throwing it to wedding party after the ceremony. You were considered lucky if you caught the bouquet, not only because it meant you were next to be married since young men always were looking for lucky brides, but also to temporarily ward off the stench of your fellow celebrants.

Bath time back then consisted of a big tub filled with hot water, and it involved an elaborate procedure of boiling pot after pot of hot water and filling the tub, often just barely big enough for an adult to sit down in.

The man of the house had the privilege of using the nice clean water first, then the sons and other menfolk, followed by the women, and finally the children. Among the children, the last to receive a bath were the youngest and by then the bath water was so dark you couldn’t see your hand, or a tiny infant, through it. Hence the saying, “don’t throw the baby out with the bath water!”

The average Middle Age abode was a thatched-roof cottage; in the straw, grass and mud of the thatched-roof lived a multitude of birds, mice and other small animals and insects. Droppings from the vermin routinely fell into the cottage and posed a terrible problem, especially at meal time. (“Thanks for the gravy? I didn’t put any gravy on the meat.”) Those who had sold sufficient pots of piss could afford four wooden posts and a sheet to cover their bed so they didn’t wake up with their mouths literally tasting like the bottom of a bird cage, and that’s supposedly how four-poster canopy beds came into existence. (Incidentally, some researchers have suggested covered mugs for ale came from the desire of imbibers to avoid any more crap in their beer than was put there in the brewing process, and the practice of politely removing one’s hat indoors sprung from this era where men would only take off their head covering when inside the manors of the wealthy, tacitly saying they trusted they would not get rat poop in their hair.)

Moreover, in these thatched-roof cottages the floor was dirt (from this we got the saying ‘dirt poor’), and only the well-off could afford flooring other than dirt, usually slate or, rarely, marble. When it rained or snowed, the slate or marble floors would get mighty slippery, and the wealthy householder would spread straw on the floor so that his family and visitors could keep their footing. That straw was called ‘thresh.’ As the old thresh became soaked and useless, they’d throw on more thresh until there was a substantial pile of it to wade through. The excess thresh would blow outside whenever the door was opened. To cut down on thresh expenses, it was common to put a piece of wood in front of the doorway, what we today call a ‘threshold.’

Back then, they cooked every meal in one big kettle that hung over the fireplace. When the kettle wasn’t being used for food, it boiled water for baths and laundry. Every morning Mrs. Joe Middle-Ages lit the fire and added things to the kettle along with anything leftover in the pot from previous meals. They ate mostly vegetables; meat was a rarity and usually involved rabbits, squirrels or mice. Pork meat was costly and especially prized and, when guests were invited for dinner, the host was proud to show them that he earned enough to be able to ‘bring home the bacon.’ Before or after the main meal, the host would often cut off a little bit of pig for each guest; then they would all sit around and ‘chew the fat.’

Plates and platters of the time were typically made of lead-based pewter. Foodstuffs with a high acid content caused the lead to seep into the food, resulting in lead poisoning and, frequently, death. For this reason, foods with a high acidity, such as tomatoes, were considered poisonous by the English. Tomatoes were known in Colonial America and the British Isles as toxic ‘poison apples’ until the 19th century.

Bread was divided according to status: the burnt bottom of the loaf was reserved for lowly serfs, the family got the middle, and valued guests were served the best part, the top. Hence we now have the phrase ‘the upper crust’ for the top social strata.

Lead cups also were used to drink ale or whiskey, sometimes together at the same time, and the potent combination of hard drink and lead poisoning would knock the drinkers out for days on end.

Often strangers, finding these unconscious bodies on the side of the road or in the bushes, would take them for dead and turn them in for burial. But first the alleged corpse would be laid out on the kitchen table for a couple of days and the family would gather around, eating and drinking and waiting and see if their inert relative would wake up. From this we derived the modern custom of ‘holding a wake.’

When the folks in Merry Olde England started running out of places to bury people, they would dig up coffins and take the bones to a ‘sawbones,’ and then reuse the graves. When reopening these ancient coffins, they discovered 1 out of 25 had scratch marks on the inside of the lids and realized to their horror they had been burying people alive.

That led to the practice of tying a string to the wrist of the body that would run up through the ground to a bell. A family member or friend would be designated to sit in the graveyard all night for week or two after the burial (this is where the term ‘graveyard shift’ allegedly originated) to listen for the bell. If the buried corpse came to and rang to be dug up, they were said to be ‘saved by the bell’ or a ‘dead ringer.’

How ‘dead ringer’ came to refer to someone who resembles another person is a mystery for another time.

This entry was posted in Humor, New Ideas, Quotes, WTF? and tagged cliches, Common Phrases, England, Etymology, Middle Ages, piss poor, RS Janes, Words. Bookmark the permalink.
Tip Jar: If you have a few bucks to chip in, it would be greatly appreciated. Thanks!