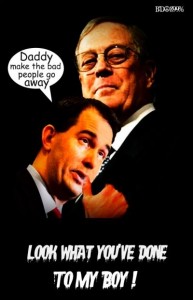 Shrugging off millions of dollars spent by labor groups to defeat him, Tom Barrett strolled to victory in Tuesday’s Democratic primary and set up a more taxing sprint toward June 5 — a historic recall that will be a rematch of his unsuccessful 2010 race against Gov. Scott Walker.

As Barrett was campaigning Tuesday, Walker was barnstorming the state and showing the fight he will bring to what is expected to be a brutal month of canvassing for one of the most important elections to state office in Wisconsin history. A poll last week showed Walker and Barrett in a dead heat.

Walker, who won over 600,000 votes despite facing only token opposition Tuesday, has been preparing for months for the fast-approaching election, raising a record $25 mil lion, while Barrett must now pivot toward this race with far fewer resources.

By uniting around Tom Barrett, we can take back Wisconsin and bring an end to Walker’s disastrous agenda. Join with Progressives United and contribute to Mayor Barrett’s campaign today. [If you’d like to contribute, go here.]

This entry was posted in 2012 Election, Christopublicans, Conservatives, Corruption, Democrats, Media, Politics, Republicans, Teabaggers, Wingnuts and tagged June 5 Election, Koch Brothers, Milwaukee, Recall Scott Walker, Tom Barrett, Wisconsin Recall Elections. Bookmark the permalink.
Tip Jar: If you have a few bucks to chip in, it would be greatly appreciated. Thanks!