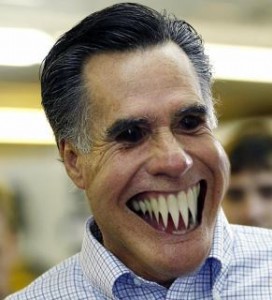 “According to several on-the-record classmates, Romney led a posse of boys to pin down a presumptively gay student, John Lauber, and Romney snipped off his bleached blond hair while Lauber cried and screamed for help.”
— From “Mitt Romney’s ‘cruel and nasty’ high school bullying: 5 ways it hurts him,” The Week, May 11, 2012.

“He can’t look like that. That’s wrong. Just look at him!”
— Mitt Romney, age 18, to his friend Matthew Friedemann right before he assaulted and cut classmate John Lauber’s hair against his will.

“The [Washington] Post reports that five former classmates of Romney’s recalled the incident independently. The former classmates, who span the political spectrum, called the act “vicious,” “senseless,” and “idiotic,” among other things.”
— Lauren Kelley, “…Story Emerges of Romney Tackling, Cutting Hair of Boy He Believed to Be Gay,” AlterNet, May 10, 2012.

“I don’t recall the incident myself, but I’ve seen the reports and not going to argue with that. There’s no question I did some stupid things when I was in high school, and obviously if I hurt anyone by virtue of that, I would be very sorry for it and apologize for it.”
— Mitt Romney, reacting to the Washington Post story and offering a tepid apology for something he doesn’t remember. After prep school, he went to Paris, France, to be a Mormon missionary. Perhaps he had an epiphany after he graduated. (BTW, in at least one interview, he chuckled after he said “I don’t recall the incident…”)

“Asked specifically about having interrupted a closeted gay student in English class, Gary Hummel, by shouting, ‘Atta girl!’ Romney said, ‘I really can’t remember that.’ “
— Philip Rucker, “Mitt Romney Apologizes for High School Pranks That ‘Might Have Gone Too Far’,” Washington Post, May 10. 2012.”

“What matters is not what Romney did then, but what he does today. And, today, he denies any recollection of the event. That’s a character flaw. It doesn’t seem like anyone else that was there that day ever forgot it.”
— The Booman Tribune, “Memory Loss Defense Makes it Relevant,” May 11, 2012.

“’For [Romney] not to remember it? It doesn’t ring true. How could the fellow with the scissors forget it?’ the former classmate said.”
— Josh Marshall at TPM, quoting an ABC News interview with a former Romney classmate.

“Leading a blind teacher into a door is cruel, but it’s still within the category of prank, in part because it targets authority. Bart Simpson pranks.” […]
“I do not believe Romney has no memory of this. I believe he is lying. His absurd statement that he has no memory of the event but that he didn’t target the boy for being gay is hilarious for its self-contradiction. A boy who routinely snickered ‘Atta girl!’ when one young gay kid in his class spoke up is not just bashing hippies. I went to an all-boys high school in the 1970s. What Romney did was a gay-bashing.”
— Andrew Sullivan, “Pranks,” The Daily Beast, May 10, 2012. [I don’t agree with Sullivan — leading a blind man into a door isn’t within ‘the category of a prank’ for a teenager old enough to serve in the military.]

“Recklessness is a common side-effect of adolescence — drinking too much, driving too fast. Meanness is another matter. Yes, teenagers are more prone to displaying the primal cruelty of ‘Mean Girls’ and ‘Lord of the Flies’ than their grown-up selves. But the Queen Bees of middle school have an unpleasant tendency to grow into the Real Housewives of Wherever.”
— Ruth Marcus, “Romney’s troubling reaction to the bullying story,” Washington Post, May 11, 2012.

“Far more disturbing to me than Romney’s teenage viciousness is his insistence it didn’t happen. Scariest kind of bully.”
— Jeff Sharlet, journalist and author, in a Tweet.

“Compulsive, pathological lying, and due to this frequent self-contradiction especially about the fact of personal history; invented past and or excessive boasting about his successes…” […]
“[Sociopaths] Often demonstrate aberrant behaviors such as cruelty to people or animals…”
— From “List of common sociopathic traits that help to alert you to the danger” at The Psychopath in the Corner Office website.

“Psychopaths have a profound lack of empathy. They use other people callously and remorselessly for their own ends. They seduce victims with a hypnotic charm that masks their true nature as pathological liars, master con artists, and heartless manipulators.”
— Alan Deutschman, “Is Your Boss a Psychopath?” Fast Company.com, July 1, 2005.

“Antisocial Personality Disorder results in what is commonly known as a Sociopath. The criteria for this disorder require an ongoing disregard for the rights of others, since the age of 15 years. Some examples of this disregard are reckless disregard for the safety of themselves or others, failure to conform to social norms with respect to lawful behaviors, deceitfulness such as repeated lying or deceit for personal profit or pleasure, and lack of remorse for actions that hurt other people in any way.”
— Derek Wood, RN, BSN, from “Antisocial Personality Disorder Overview“