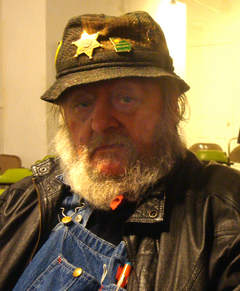 Although I shook hands with him once nearly four decades ago, I only really got to know Richard in the last 15 years of his incredible, eventful life. I went to all of his first three clubs — the two in Old Town, and the famous Quiet Knight on Belmont in Chicago — and they were always superior, affordable places to hear great music of all genres. Richard knew, hired, and helped most of the best musicians in blues, rock, jazz and folk music of the late ‘60s and early ‘70s and never got rich doing it, but he always paid and treated his performers decently and they became his friends. Richard’s wealth was in the number of people who will remember and speak well of him, and in the myriad anecdotes of his gruff but kindhearted nature. I hope someone writes a good biography of Richard Harding; his memory deserves no less. Rest in peace, Richard. Here’s the obit from the Chicago Sun-Times:

Richard Harding danced to all kinds of music.

The effervescent owner of the Quiet Knight music room was the first to bring Bruce Springsteen and the E Street Band, the Talking Heads and Jimmy Buffett to Chicago. He loved Bob Marley as much as he loved Miles Davis, all of whom performed at his beloved Quiet Knight, 953 W. Belmont.

Mr. Harding died Saturday of cancer in a suburban hospice. He was 82.

The Quiet Knight ran between 1969-1979 on the second floor of an old brick building that was a short riff from the Belmont L stop.

Los Angeles had the Troubador. Chicago had the Quiet Knight.

Mr. Harding booked Herbie Hancock, John Denver and Arlo Guthrie, while local acts like the Siegel-Schwall blues band were mainstays. Linda Ronstadt (with Don Henley on drums and Glenn Frey on rhythm guitar) headlined the Quiet Knight for five nights in the summer of 1971.

Mr. Harding had previously owned Poor Richard’s, 1363 N. Sedgwick, and the first Quiet Knight at 1311 N. Wells. Andy Warhol’s “Exploding Plastic Inevitable” played for a week in 1966 at Poor Richard’s with special guests The Velvet Underground (minus Lou Reed, who was in the hospital).

“Richard Harding is an era in the music world,” said Corky Siegel, who held a Tuesday night residency with the Siegel-Schwall Band between 1969-1974. “Richard was a happy guy. He worked at it. Maybe he had some depression, but he forced himself to be a happy guy — which is a lesson for all of us.”

Siegel’s first public solo date was in 1974 opening for Muddy Waters at the 400-seat Quiet Knight.

Chicago was the first big city out of the South in which Buffett worked.

“Richard came to a talent showcase in Nashville,” Buffett said on Tuesday. “He booked me [around 1972] based on that showcase. I had worked for some despicable club owners. He was the nicest club owner, although he still ran a tight ship. He gave me a month’s work at a time when I really needed it. I was scared of him at first. But I could tell he was a fun guy.”

Buffett opened solo acoustic for Dan Hicks and the Hot Licks, Siegel-Schwall and Neil Sedaka. Buffett also met his future friend and collaborator Steve Goodman at the Quiet Knight. They would saunter back to the Earl of Old Town for last call and a cheeseburger since Earl Pionke had a late-night license, unlike the Quiet Knight.

Buffett wrote the 1973 hit ballad “He Went To Paris,” based on Eddie Balchowsky, the one-handed classical pianist who was also a Quiet Knight custodian, a junkie, and a student of Shambhala, based on the myth of Shangri-La. Balchowsky lost his right hand in the Spanish Civil War. He died in 1989 at age 74 after jumping or falling in front of an L train.

Quiet Knight performers Loudon Wainwright, Utah Phillips and Dion DiMucci also wrote songs about Balchowsky after performing at the club. Buffett said, “The Quiet Knight was full of characters. I’m getting goose bumps. Richard had a great deal of satisfaction in helping me become who I was.

“I never forgot him.”

Last summer Buffett dedicated a ballad to Harding during his performance at Toyota Park in Bridgeview.

Siegel added: “Richard loved the music and he loved the musicians so much. He booked the most amazing acts. Carly Simon and Howlin’ Wolf. Tom Waits played there a bunch, and I’d hang out with him in the dressing room. Musicians were like family to him.”

In 1966, Arlo Guthrie bought his first car — a 1957 MGA. “My first real road trip was to Chicago, where a guy named Richard Harding had a club called Poor Richard’s,” Guthrie wrote in an email. “I immediately loved this crazy character. When my shows were over, we’d drink our way from club to club, stagger home in the wee hours of the next morning having met and played music with everyone even remotely connected to the world of Chicago folk music. Chicago became a second home. I continued to play for Richard when he opened the Quiet Knight, where I met Steve Goodman and others who would become lifelong friends. Even after I had outgrown the clubs and was performing in larger venues, I’d come and play for Richard. He was family.”

Mr. Harding was born in Chicago. His father was an electrician, which may have explained why Mr. Harding always carried several pens and sharp pencils in his shirt pocket protector. His mother was a nurse. Mr. Harding graduated from Amundsen High School where he was a star linebacker.

Like a fleeting dream, Mr. Harding vanished from the scene after he sold the Quiet Knight in 1979. He landed in Aspen, Colo., in 1980, and in 1983 I tracked him down in San Francisco where he worked in water quality control. He came back to Chicago and drove a cab. He became a regular at the Monday night poetry slam at Weeds tavern.

In 1985, he opened what was to be his final club, Da Vinci’s Music Gallery, on the third floor of a turn-of-the-century building at 2011 W. North in then-sketchy Wicker Park. As a tribute to Mr. Harding’s charms, Tom Waits flew out for opening night just to hang in the audience. Studs Terkel was there, and so was Balchowsky. Harding wore a pink flower in his gray hair. Bossa nova saxophonist Stan Getz played opening night.

This, too, was Shangri-La.

“I deal best when I’m slightly close to the edges,” Mr. Harding told me a few days before he opened his club. “They’re going to say I’m crazy again for going into Wicker Park.” As usual, Mr. Harding was ahead of his time.

Around this time, I had a get-together at my house. People were standing around the Rock-Ola jukebox loaded with Merle Haggard, Springsteen and obscure New Orleans singles from the likes of Jesse Hill. Mr. Harding walked in the room wearing a feathered cowboy hat and brown leather jacket. His white beard gave him the look of a backwoods trapper. He said his hellos because he wasn’t so good at goodbyes.

And then he danced to every song on the jukebox.

A memorial gathering is 6-9 p.m. Thursday at Maloney Funeral Home, 1359 W. Devon. [Note: Unfortunately, I posted this too late for the memorial.]

This entry was posted in Blues, Jazz, Music, Rock and tagged Dave Hoekstra, Obit, Quiet Knight, Richard Harding. Bookmark the permalink.
Tip Jar: If you have a few bucks to chip in, it would be greatly appreciated. Thanks!