Today’s Quotes: Trump without the ‘T’ 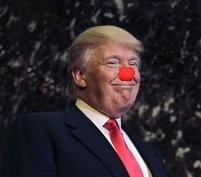 “I’ve been known to be a very smart guy for a very long time.”
— Donald Trump on CNBC recently, patting himself on the back since no one else will.

“I’m smart! Not like everybody says… like dumb… I’m smart and I want respect!”
— Fredo Corleone, from the film, “The Godfather: Part II.”

“I do not understand the cost benefit here. The costs are clear. The benefit — what voter is gonna vote for him [Romney] because he is seen with Donald Trump? The cost of appearing with this bloviating ignoramus is obvious it seems to me…. Donald Trump is redundant evidence that if your net worth is high enough, your IQ can be very low and you can still intrude into American politics.”
— George F. Will, conservative Republican Reaganite, on ABC’s This Week, May 27, 2012.

“Most marks come from the upper strata of society, which, in America, means that they have made, married, or inherited money. Because of this, they acquire status which in time they come to attribute to some inherent superiority, especially as regards matters of sound judgment in finance and investment. Friends and associates, themselves social climbers and sycophants, help to maintain this illusion of superiority. Eventually, the mark comes to regard himself as a person of vision and even of genius. Thus a Babbitt who has cleared half a million in a real-estate development easily forgets the part which luck and chicanery have played in his financial rise; he accepts this mantle of respectability without question; he naively attributes his success to sound business judgment. And any confidence man will testify that a real-estate man is the fattest and juiciest of suckers.”
— Excerpt from “The Big Con: The Story of the Confidence Man” by David W. Maurer, published in 1940, (pgs.103-4).

“I’m not a schmuck. Even if the world goes to hell in a handbasket, I won’t lose a penny.”
— Donald Trump. [No, but the banks who own you will.]