All I can tell you is that this video says a band called — ho, ho — ‘The Genteels’ performed this grimace-inducing monstrosity named “Take It Off!” and that looks like the great Mamie Van Doren doing the striptease. I couldn’t locate the source film, but this clip is probably part of some godawful forgotten B-movie fit only for the after-midnight ‘bottom-of-the-bill’ crowd at a drive-in movie theater that no longer exists. 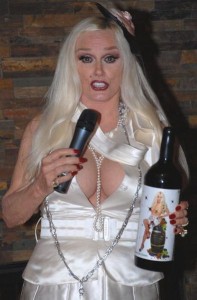 80, and she’s the last one standing of the ‘Big 3’ Hollywood sex symbols of the ’50s — Marilyn Monroe, Jayne Mansfield and Mamie. (She got her stage name, BTW, by combining President Dwight Eisenhower’s wife’s first name with the surname of a famous family of the 1950s, the Van Dorens. She took the name five years before the quiz show scandal of Charles Van Doren, which, at any rate, did nothing but boost her career.)  I like all three of the ‘M’s’ for various reasons, but Mamie is the only one who really got to play an edgy ‘bad girl’ in some of her films — and she was good at being bad, so to speak.  I can’t think of any current sexpot who can carry her g-string, either in terms of acting talent or raw sexuality.  I guess — koff, koff, wheeze — they just don’t make ’em like that anymore, kiddies. Now, where did I put my glasses? They’re around here somew– what? On top of my head? How did they get up there?! Koff, koff, wheeze…

Above: Mamie launching her new wine in 2007. Photo copyright Luke Ford at lukeford.net. 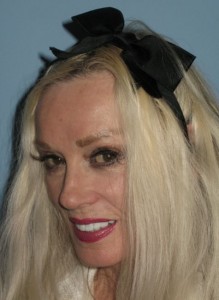 Here’s how Mamie looked in 2008, age 77. She credits plastic surgery and ‘Christian Buddhism’ for her youthful appearance.

This entry was posted in Bizarre But Real, Humor, Music, Rock, Video, WTF? and tagged 1950s, Mamie Van Doren, Sex Symbols, Striptease, Take It Off, The Genteels. Bookmark the permalink.
Tip Jar: If you have a few bucks to chip in, it would be greatly appreciated. Thanks!