The Wicked Mr. Pickett and Jimi Hendrix On Stage Together in 1966

While Berry Gordy at Motown in Detroit was trying to tailor his soul acts to appeal to white pop audiences (i.e.: making them more doo-wop tame, ala The Supremes), over at Stax-Volt in Memphis they were going for the gut with real soul belters like Otis Redding and the guy pictured singing below, Wilson Pickett. 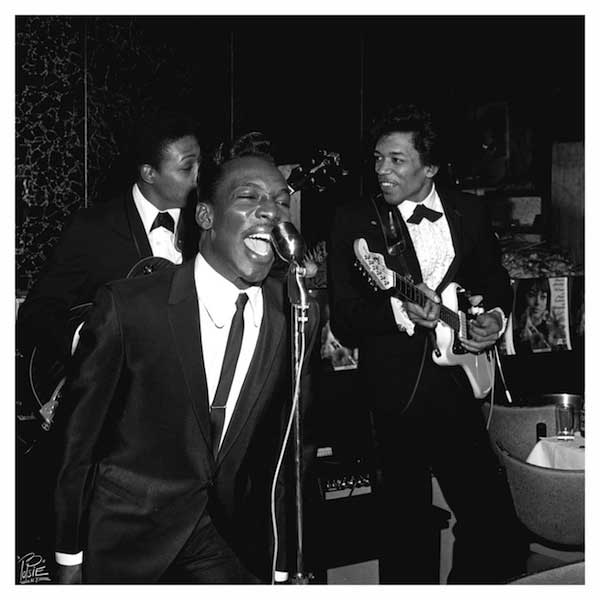 Oh, and that guitar player behind him? That’s none other than Jimi Hendrix in a tux, playing on a pre-1965 Fender Jazzmaster at an Atlantic Records party in 1966. (Atlantic distributed Stax-Volt records nationwide.)  A year later, wielding a Strat, Jimi would be performing at the Monterey Pop Festival and the rest is history.  (Thanks to Houndbag for this rare photo.)

Wilson Pickett died in 2006 at the age of 64, nearly forgotten by the mainstream music scene; Hendrix, Redding and others of the great soul music explosion of the ’60s having preceded him.  To this day, though, even people too young to have seen ‘the Wicked Mr. Pickett’ perform live know his music — bands and jukeboxes still play “Land of a Thousand Dances,” “In the Midnight Hour,” “Funky Broadway” and the tune below, and kids still can’t help finger-poppin’ and getting up to ‘shake they booty to that funky beat.’

As a bonus, here’s Jimi Hendrix’s first appearance on TV, playing Junior Walker’s hit “Shotgun” behind Buddy and Stacey (who were also Little Richard’s back-up singers), circa 1965. (Excuse the ad, but the video came that way.)

Finally, a brief video of some guy playing around on an old Fender Jazzmaster:

This entry was posted in Blues, Music, Rock, Video, Voting and tagged Atlantic Records, Fender Jazzmaster, Jimi Hendrix, Soul Music, Stax-Volt, Wilson Pickett. Bookmark the permalink.
Tip Jar: If you have a few bucks to chip in, it would be greatly appreciated. Thanks!