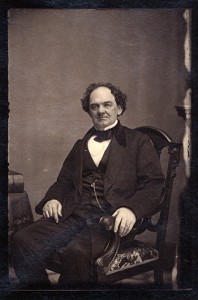 Showman, mountebank and con artist Phineas Taylor “P.T.” Barnum was born today in 1810. Although he died in 1891, he could be called the guiding inspiration for marketing and advertising in the 20th and 21st centuries, especially in the political realm. Perhaps he didn’t originally say “There’s a sucker born every minute” but he repeated the phrase often and it’s become the secret motto of the Republican Party, the right-wing media, and the corporations that lavish both with carloads of money.

“I don’t care what you say about me, just spell my name right.”
― P.T. Barnum

“Nobody ever lost a dollar by underestimating the taste of the American public.”
― P.T. Barnum (similar to a quote by H.L. Mencken).

“Opinions are like assholes; everyone’s got one.”
― P.T. Barnum

“Never give a sucker an even break.”
― P.T. Barnum

This entry was posted in Christopublicans, Conservatives, Corporations, Corruption, Humor, Idiots, Media, Politics, Quotes, Republicans, Teabaggers, Wingnuts and tagged Corporate Money, P.T. Barnum, Right-Wing Media, Suckers. Bookmark the permalink.
Tip Jar: If you have a few bucks to chip in, it would be greatly appreciated. Thanks!