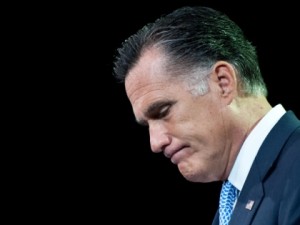 Here it is in a nutshell: either Mitt Romney was lying in documents he filed with the SEC certifying he was president, CEO, chairman, and sole stockholder of Bain Capital until 2002 , in which case he’s guilty of felony fraud, or he’s been lying to the public ever since by claiming he quit Bain in Feb. 1999.  There is no wiggle room here — it’s one or the other.  Currently, the Romney campaign is trying to dodge the issue by dangling Condi Rice out there as a veep candidate (not gonna happen, IMO), but ‘Baingate’ is an infected abcess growing on the forehead of Romney’s presidential chances and an exemplar of the empty, conscienceless, ‘say anything to get elected,’ one-lie-after-another campaign Romney has run thus far.  Ironically, Romney has been using his business experience running Bain as his qualification to be president and barely mentioning his rocky single term as Gov. of Massachusetts; in one of the best cosmic jokes of this election cycle, Jobs Preacher Mitt just had the poisonous Bain snake he was handling to prove his economic prowess curl around and bite him on the ass.  Short of a teary televised confession that he is a dishonest sack of congealed crap who doesn’t deserve to be president, what does he say?  Your guess is as good as mine, but I’ll bet a large ugly public weasel and a human staff sacrifice will be involved. Here are some of the details of this burgeoning scandal:

Mitt Romney stayed at Bain 3 years longer than he stated

Government documents filed by Mitt Romney and Bain Capital say Romney remained chief executive and chairman of the firm three years beyond the date he said he ceded control, even creating five new investment partnerships during that time.

Romney has said he left Bain in 1999 to lead the winter Olympics in Salt Lake City, ending his role in the company. But public Securities and Exchange Commission documents filed later by Bain Capital state he remained the firm’s “sole stockholder, chairman of the board, chief executive officer, and president.”

The timing of Romney’s departure from Bain is a key point of contention because he has said his resignation in February 1999 meant he was not responsible for Bain Capital companies that went bankrupt or laid off workers after that date.

Who Exactly is Mitt Romney Lying to?

An explosive report in today’s Boston Globe has raised even more questions about Mitt Romney’s record at Bain Capital and what he’s hiding in his tax returns.

WHAT MITT ROMNEY SAYS: He says left Bain Capital in February 1999 to go run the Olympics and had nothing to do with the company after that and is therefore not responsible for the factories it closed, workers it laid off, and jobs it shipped overseas.

— “Until 2002, when Romney and Bain Capital finalized a severance agreement, he remained the firm’s ‘sole stockholder, chairman of the board, chief executive officer and president,’ according to SEC documents. […]“

— “Romney’s state financial disclosure forms indicate he earned at least $100,000 as a Bain ‘executive’ in 2001 and 2002, separate from investment earnings.”

WHY IT MATTERS: Mitt Romney has either been lying to the public about his role at Bain Capital or filing false documents with the SEC. Here’s how a former SEC commissioner explains it:

Roberta Karmel, a former SEC commissioner who served during President Jimmy Carter’s administration, said the documents raise questions about Romney’s role at Bain after the GOP contender says he left the company.

“It’s a criminal offense to file a false document with the SEC,” Karmel said. “And if that isn’t true, then he made a false filing, which is something I don’t think he wants to claim.”

She continued: “If he listed himself and he was getting paid, he was legally responsible.”

“Either you’re the owner or you’re not the owner,” Karmel added. “You can’t have it both ways.”

– GS Industries – 750 Jobs Lost: In a series of ads earlier this year, the Obama campaign hit Romney over Bain Capital’s purchase of GS Industries, a steel company that closed its Kansas City plant and eliminated 750 jobs in February 2001. The Romney campaign responded by claiming that Romney had left Bain Capital well before 2001, and was therefore not tied to the collapse of the GS. Bain Capital and its executives, including Mitt Romney, earned at least $12 million on the initial investment.

– KB Toys – Up to 3,500 Jobs Lost: During the primary season, Newt Gingrich’s 30 minute documentary on Romney and Bain Capital spent a significant amount of time focused on KB Toys, a retail chain bought by Bain in 2000. At the time, the Romney campaign, with an assist from fact-checking groups like PolitiFact, pointed to the calendar. As these new filings show, Romney was still very much at Bain Capital when they purchased KB Toys, and profited mightily when the company took out crippling loans to pay Bain Capital an $83 million dividend.

– Dade International – 1,700 Jobs Lost: Months after Romney claims to have left the company, Bain Capital received a $242 million bounty for its stake in the medical supply company. Romney profited substantially from the deal. In 2002, Dade International filed for bankruptcy, costing more than 1,700 people their jobs. At the time, Romney was the 100 percent owner of Bain Capital, the new documents show.

–DDi Corporation – 275 Jobs Lost: In 1996, the circuit board manufacturer was bought by a group of investors, with Bain Capital in the lead, for more than $40 million. By December 1999, DDi closed a Colorado plant and fired 275 workers. Bain Capital, with Romney still listed as Chairman and CEO, then proceeded to take DDi public, raising $170 million during the company’s IPO in 2000. Over the next few months, Bain began selling off its stock, raising almost $100 million, more than doubling its investment. The stock plummeted shortly thereafter.

HOW DO WE GET TO THE BOTTOM OF THIS: The only way we can get to the bottom of Romney’s time at Bain Capital, his shady foreign accounts and secret Bermuda corporation are for him to release his tax returns going all of the way back to at least 1999. He provided 23 years of tax returns to John McCain in 2008 when he was being vetted for vice president, so it should not be difficult for him to produce them and put all of this to rest. If he continues to keep them secret, one is only left to wonder what Mitt Romney has to hide?

BTW, PolitiFact owes us an apology for misleading the public once again.