Today’s Quotes: The Wreck of the Romney 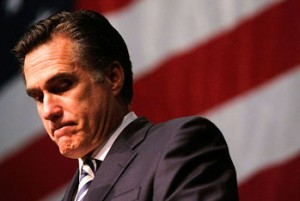 “I was in Salt Lake City for three straight years. I don’t recall even coming back once to go to a Bain or management meeting.”
— Romney in 2012.

“[T]here were a number of social trips and business trips that brought me back to Massachusetts, board meetings, Thanksgiving and so forth.”
— Romney in 2002. [Emphasis mine.]

“Documents on file with the SEC place Romney in charge of Bain from 1999 to 2001, a period in which the company outsourced jobs and ran companies that fell into bankruptcy. Romney has tried to distance himself from this period in Bain’s history, saying on financial disclosure forms he had no active role in the company as of February 1999.
“But at least three times since then, Bain listed Romney as the company’s ‘controlling person,’ as well as its ‘sole shareholder, sole director, chief executive officer and president.’ One of those documents — as late as February 2001 — lists Romney’s ‘principal occupation’ as Bain’s managing director.”
— Minnesota Public Radio News, July 16, 2012.

“He actually retired retroactively at that point. He ended up not going back to the firm after his time in Salt Lake City. So he was actually retired from Bain.”
— Ed Gillespie, senior Romney campaign advisor, reeking flop-sweat on Meet the Press, July 15, 2012.

“How do you ‘retire retroactively’? Is that like whenever something you don’t like pops up in your past, you can just make it disappear by ‘retiring retroactively’ at some point in the future? Even for politics, this is lame.”
— Justin Reader

“There is no whining in politics. Stop demanding an apology, release your tax returns.”
–– John Weaver, a Republican strategist who formerly worked for John McCain, to Mitt Romney.

“Here’s what he should do. He should release the tax returns tomorrow. This is crazy… you’ve got to release 6, 8, 10 years of back tax returns. Take the hit for a day or two.”
— Bill Kristol, Republican and editor of conservative The Weekly Standard.

“If you have things to hide, then maybe you’re doing things wrong. I think you ought to be willing to release everything to the American people.”
— Gov. Robert Bentley, Republican of Alabama, advising Romney to release his tax returns.

“He [Romney] invested in companies that have been called pioneers of outsourcing; I don’t want pioneers in outsourcing, I want some insourcing. I want to bring companies back.”
— President Barack Obama on July 14, 2012.

“I want to stop giving tax breaks to companies that are shipping jobs overseas. Let’s give those tax breaks that are investing right here in Virginia, right here in the United States of America, hiring American workers to make American products to sell around the world.”
— President Barack Obama on July 14, 2012.

“If Romney has nothing to hide, then why is he hiding all of this?”
— Richard Sherricky