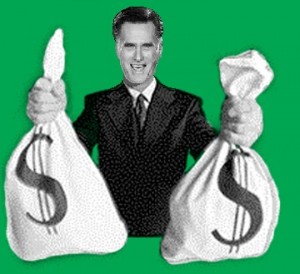 According to a study by the Tax Policy Center published in the conservative Wall Street Journal yesterday, Mitt Romney’s tax plan, no matter how you slice it, will raise taxes on the lower 95 percent of Americans to pay for tax cuts for the top 5 percent, AKA the Romney family and their friends and campaign donors. It’s stunning both how idiotic and audacious is this plan for raw plutocracy and, since it’s repeating the mistakes of the Bush years, how anyone could possibly be deluded into thinking it would improve our economy.

A new study released Wednesday suggests that Mitt Romney‘s tax plan would benefit the rich and hurt the poor and middle class, no matter how current blanks in the plan are filled in.

Mr. Romney’s ambitious plan would extend current Bush-era tax rates, plus cut rates another 20 percent, eliminate investment taxes altogether for households making under $200,000, and abolish the dreaded alternative minimum tax. But it provides few details about what tax breaks would be pared to offset the budget hit.

The study basically concludes that eliminating tax breaks to offset the impact of Mr. Romney’s rate cuts would inevitably hurt the middle class. It was done by scholars working with the nonpartisan Tax Policy Center, including a former Obama administration economist.

Even assuming that tax breaks such as the charitable and mortgage interest deductions are eliminated for the wealthy first, and only then reduced as needed for other income groups, “the net effect of the plan would be a tax cut for high-income households coupled with a tax increase for middle-income households,”