Outside the Conservative Bubble, Ryan is a Bad Choice 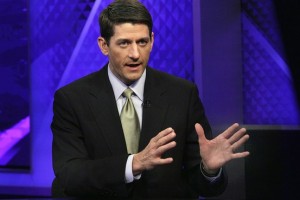 Rep. Paul Ryan, the Wisconsin Republican who was screamed at by his own constituents in 2011 over his plan to privatize Social Security and turn Medicare into a pathetic coupon system to the point that he stopped having public meetings, is a typically terrible Romney choice, if he expects to have any appeal beyond the mean-spirited, nearly inarticulate and perpetually angry GOP base. (That Romney is still trying to convince those voters this late in the game is a testament to how weak his candidacy is in the first place.) However, Ryan, like Romney, is a first-class open-faced liar and is taken seriously by the Corporate Hand Puppets who host Sunday morning TV talk shows so, for the short-term, Romney’s numbers will no doubt bounce up a couple of clicks. Also like Romney, Ryan has already tempered his message of fiscal sacrifice, smoothly assuring voters that he has no plans to end Social Security and Medicare and that his budget plan will take care of the nasty deficit lickety-split.  Of course, none of that is true.  Scoring Ryan’s budget, one finds that it demands sacrifice of the poor and middle-class and spares the wealthiest ten percent, while lavishing even more taxpayer money on defense contractors and extending deep deficit spending for at least 40 more years.  This is not a budget, it’s a poor oligarchic joke.  I trust the thus-far competent Obama campaign machinery is not going to let this Midwestern mountebank get away with his sleazy mumbo-jumbo and the Romney-Ryan poll numbers will soon settle back down to their declining course, despite any secular deification of Ryan by the inbred denizens of Washington’s Cocktail Party Village.  Oh, and the subject of Romney’s hidden tax returns will reappear as an issue right after the Republican convention.  In the excerpt below, John Nichols sums it up by asking “Paul Ryan? Seriously?”:

“Vice presidential nominees are supposed to help tickets, not hurt them.

“Romney clearly needs help. Just back from a disastrous trip to Europe and the Middle East, mired in controversies about the “vulture capitalism” he practiced at Bain Capital and his refusal to release tax returns that his dad – former Michigan governor and 1968 Republican presidential contender George Romney – said contenders for the Oval Office had a a responsibility to share with the voters, Romney could use a boost.

“But Ryan would be a burden, not a booster, for a Romney-led ticket.

“Like Romney, Ryan is a son of privilege who has little real-world experience or understanding. He presents well on Sunday morning talk shows and in the rarified confines of Washington think tanks and dinners with his constituents – the Masters of the Universe on Wall Street – but his record in Congress and the policies he now promotes are political albatrosses.

“Some Republicans, perhaps even Romney, do not get this.

“But the Obama campaign recognized, correctly, that Ryan’s positioning of himself as the point man on behalf of an austerity that would remake America as a dramatically weaker and more dysfunctional country makes him the most vulnerable of prominent Republicans.

“Ryan scares people who live outside the “bubble” of a modern conservative movement that thinks the wealthiest country in the world is “broke” and that Ayn Rand is an literary and economic seer.”