Since the Republicans really have no ideas to create jobs, and, despite the WPA, CCC, and the long careers of GOP politicians, deny the government can create them, they keep going back to the one notion that’s failed miserably: giving tax cuts to the rich and profitable corporations in the vain hope they will hire more workers. (Gee, if that were true, we’d be swimming in jobs right now.) It’s magical thinking of the worst kind. Read the chart below; GE paid NO taxes in 2010 and CUT 20,000 jobs; ExxonMobil paid NO taxes in 2009 and hired no new workers. Every time some Republican tells the outrageous lie that tax cuts create jobs they ought to be asked to cite exactly which US corporations or wealthy individuals hired on large numbers of new workers due to tax cuts. 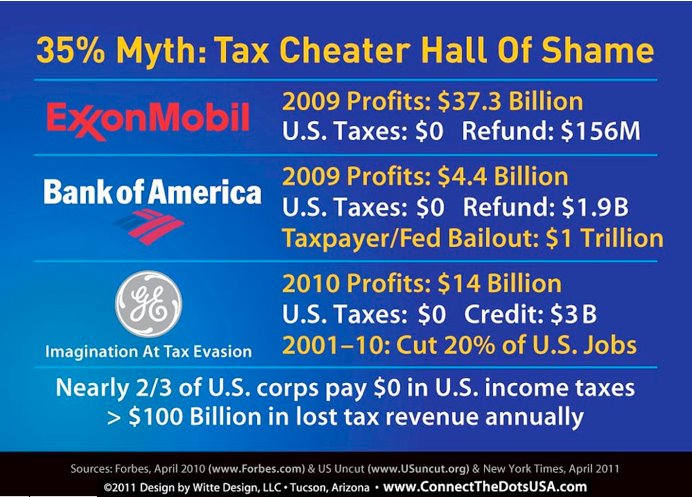 This entry was posted in 2012 Election, Christopublicans, Conservatives, Corporations, Corruption, Economy, Politics, Republicans, Teabaggers, Wall Street, WTF? and tagged Bank of America, Corporations, ExxonMobil, GE, GOP, Jobs, Lies, Tax Cuts. Bookmark the permalink.
Tip Jar: If you have a few bucks to chip in, it would be greatly appreciated. Thanks!