Today’s Quotes: You Are Right to Be Indignant

The tax plan of every prominent Republican candidate for president would raise taxes on everyone but the wealthiest Americans, yet they continue to peddle this offal and, apparently, the GOP base is buying it. Outside of that minority of cretins and racists, however, the OWS Movement is gaining ground as Americans start coming to their senses — they not only have a right to be indignant, but an obligation to the future to change this broken ‘reverse Robin Hood’ system. 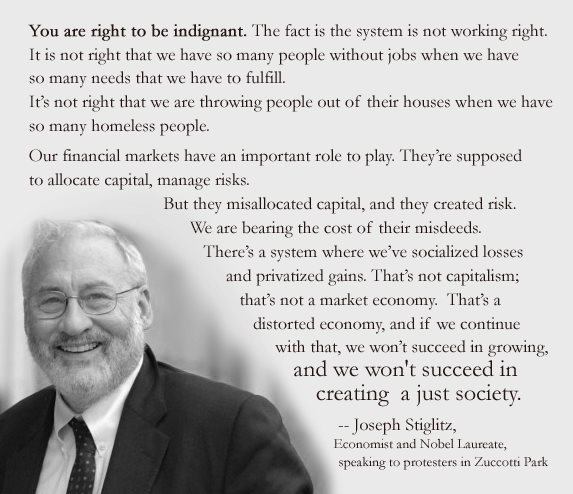 “Mitt Romney: Romney’s tax plan includes a $6.6 TRILLION giveaway to corporations and the wealthiest Americans. Meanwhile, Romney’s Medicaid cuts are even more draconian than the ones in [the] Paul Ryan plan. Both of their plans … also end Medicare, naturally.
“Rick Perry: Perry’s tax plan would not only lower income taxes on the wealthy, it would also completely eliminate taxes on capital gains and dividends (currently taxed at 15 percent). In other words, Perry would dramatically expand the loophole that already allows millionaires (like Mitt Romney) and billionaires to pay a lower tax rate than many middle class Americans. When asked [about] this egregious giveaway to the wealthy, Perry responded: ‘I don’t care about that.’ In addition, Perry’s plan also embraces the privatization of Social Security (a program he has referred to in the past as an unconstitutional ‘Ponzi scheme’ that is a ‘monstrous lie‘).”
— From “2012ers Unite Behind Massive Giveaways To The Wealthy,” The Think Progress Report, Think Progress.org, Oct. 25, 2011.