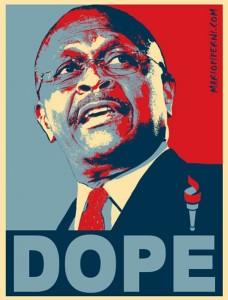 Whatever their fervid denials, anyone who knows Republicans, and especially the Teabagger variety, knows most of them are, in their hearts, racists. Since blatant racism is no longer acceptable in society and certainly will not help Republican candidates get elected except in weird backwaters of the Deep South, they try to disguise their racism with socially-palatable code words; even in the days of Nixon, the GOP used the phrase ‘law and order’ with a wink to the bigots, as they knew they were talking about imposing ‘law and order’ only on black folks. Later, during the reign of St. Reagan, Ronnie invented mythical ‘welfare queens’ tooling around in new Cadillacs on the taxpayer’s dime — no one got the impression he was referring to a white woman in his fantasy world. So far, a portion of the small GOP base has been building up poll numbers for Herman Cain, both to smack the hated Mitt Romney and to be able to falsely spout, “See, I can’t be a racist — I like Herman Cain!” But that’s only for another few days. Once the video below is seen by these various Teabaggers and Christopublicans, the image of Cain putting his black hands on a white woman will sink in, and Cain will be wallowing down in single-digit Bachmann country in the polls once again.

Bialek, a former employee of the National Restaurant Association’s educational foundation, accused Cain of making an inappropriate advance toward her in 1997, when she visited Cain in Washington, D.C. to seek his assistance in finding a new job. She appeared at a press conference arranged by attorney Gloria Allred.

Bialek accused Cain of touching her in an inappropriate manner during her visit to D.C., where Cain was still serving as president of the restaurant association. When she rebuffed him, Cain said, “You want a job, right?” per Bialek’s retelling.

Cain’s spokesman denied the new allegations in a statement while the press conference was under way.

Visit msnbc.com for breaking news, world news, and news about the economy

This entry was posted in 2012 Election, Christopublicans, Conservatives, Media, Politics, Republicans, Teabaggers, Video, Wingnuts and tagged Herman Cain, Mitt Romney, MSNBC, Nixon, Racism, Reagan, Sexuall Harassment, Sharon Bialek. Bookmark the permalink.
Tip Jar: If you have a few bucks to chip in, it would be greatly appreciated. Thanks!