Even Without the OWS, the Wall Street Banks Are Failing 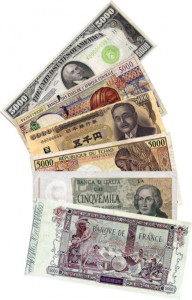 Not to take anything away from David Weidner’s fine reporting but, to boil it down, it comes to this: Wall Street has run out of suckers to buy their bad paper and the small fry and institutional investors are nearly gone from the markets — part of what happens when your middle-class is in decline and no longer has any money to invest. Of course, the ‘Masters of the Universe’ can’t run games on each other, so who’s left to buy the mountains of bad paper that the Big Banks have accumulated? Nobody, not even befuddled Europeans or bewitched Asians. If the US gov’t doesn’t step in, it’s ‘goodnight, Irene’ and, soon, the OWS Movement will have nothing worth occupying in that Manhattan neighborhood — some of the banksters might very well be sleeping in Zuccotti Park along with them. Also note, thanks to the aggressive marketing of gold, that the price is starting to tank.

Why the big Wall Street banks are hurting

The 1% is worried, and not because of Occupy Wall Street. A lack of easy money to inflate a new bubble has brokers and big banks — including B of A and Goldman Sachs — losing money and doing layoffs.
By MSN Money partner on Tue, Nov 15, 2011 1:30 PM
By David Weidner for MarketWatch

It’s not the protesters drumming in Zuccotti Park or the chants of “shame” keeping them up at night at their Manhattan homes. It’s a business model built to churn out easy money in a bubble that’s sounding an alarm.

Wall Street is struggling with market forces that keep dragging its bubble machine back to the ground.

Oh, the banks have tried. On the retail front, Bank of America (BAC 0.00%) said it would slap a $5 monthly fee on its debit card users. On the institutional front, MF Global ramped up leverage to buy risky European sovereign debt.

But B. of A. was beaten back by a consumer revolt and an industry rebellion. And MF Global chief executive Jon Corzine found out the hard way that leverage is still every bit as risky as it was in 2008.

Without easy money, Wall Street’s apparatus for mining easy cash have gone quiet. Goldman Sachs Group (GS 0.00%) lost money trading 21 days during the most recent quarter, the most since 2008. The firm even owned up to $100 million in losses on a single day.

Much of this is due to the evaporation of the huge spreads in fixed income that traders generally take advantage of. Treasurys and corporate and municipal bond spreads have narrowed to a sliver. This has hurt the so-called shadow bankers as well. Witness the 5.5% decline for the Hedge Fund Research Index in the third quarter.