Gingrich Misleading About ‘Janitor’ and Teacher Pay in New York 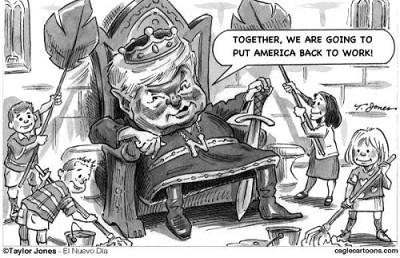 Set down any hot liquids before I reveal this shocker: Newt Gingrich has been misleading (‘lying’) about the relative pay of NYC teachers and union janitors. As PolitiFact notes, an average first-year teacher makes about 1.4 more than a first-year worker who just mops the floors. From Politifact: “Cleaner: $15.77 per hour, or $32,801 for a full year. (First- and second-year employees are paid below the standard rate; in year three, it goes up to the standard rate of $18.13 an hour.)” Meanwhile, a first-year teacher with only a bachelor’s degree and no prior teaching experience is paid $45,530. Teachers with a master’s but no teaching experience start at $51,425. Custodial Engineers (or Standing Engineers) are a different story: They have to take care of boilers and other power plants, electrical and plumbing repairs, rod water lines, remove snow and ice, and do other hard physical labor, as well as clean up messes and routine maintenance. They also, as head of the maintenance staff, have to schedule work, deal with resupplying the school, and figure payroll. Plus, you have to have extensive experience and special training to be a Custodial Engineer. It’s no job for an inexperienced teenager. In NYC, C.E.’s start at $48,630 and go up to $55,625. Depending on the size of the school, the numbers of workers on the maintenance staff, and the responsibilites involved, an experienced senior Custodial Engineer can make up to $114,000 per year, but that’s rare. Face it — being an engineer is a tougher job than teaching and god forbid some kid lets the boilers die when the temps drop — you could lose the whole school. Of course, pompous, pampered elitist gasbag Gingrich has no idea what is involved with keeping a school running, just as he has no idea what it’s like to be poor.

“If you take one half of the New York janitors, who are paid more than the teachers. An entry-level janitor gets paid twice as much as an entry-level teacher. You take half those janitors, you could give lots of poor kids a work experience in the cafeteria, in the school library, in the front office, in a lot of different things. I’ll stand by the idea young people ought to learn how to work.”
— Newt Gingrich, talking straight out of his ass at the last GOP debate, via Raw Story.strong>

Hey, Mr. ‘Big Ideas’– what do those adults who support families do for jobs when they are replaced by kids? And what about the steep loss in tax revenue if this idiot plan is adopted nationwide?

This entry was posted in 1 Percent, 2012 Election, 99 Percent, Bizarre But Real, Cartoon, Christopublicans, Conservatives, Economy, Humor, Idiots, Politics, Republicans, Teabaggers, Wingnuts, WTF? and tagged Janitors Pay, Jobs, Newt Gingrich, NYC, PolitiFact.com, Teachers. Bookmark the permalink.
Tip Jar: If you have a few bucks to chip in, it would be greatly appreciated. Thanks!