Is Olbermann Out at Current TV? 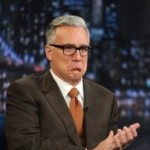 The rumor mill has been swirling that Keith Olbermann is about to leave Current TV, the new home for his Countdown show since last spring.  It would be a shame if he did — the brilliance and caustic wit he exhibits during his show is unparalleled on Current or his old roost on MSNBC.  (Besides, anyone who reads James Thurber short stories on the air every Friday should be encouraged, although I’ll admit Thurber is better read quietly than said aloud.)

The trouble allegedly started when Olbermann, who is, or was, reportedly fourth in line in Current management as Chief News Officer, wasn’t consulted about on-air hires and a new boss took over as Current president, David Bohrman, a CNN retread.  Then there were annoying technical glitches on Countdown and the failure of the fledging progressive network to upgrade its equipment. Olbermann showed his aggravation by sitting out coverage of the Iowa and New Hampshire primaries.

That left it to Cenk Uygur, former Michigan Gov. Jennifer Granholm, and Al Gore, along with random members of Uygur’s ‘The Young Turks’ to fill out the long spaces between vote totals.  Cenk and ‘TYT’ are fine, but it’s obvious this kind of election anchoring is not his thing; Granholm can be relied upon to spout tame Dem Party pablum that won’t keep anyone awake, and Gore — well, sorry to say it, but Al Gore is just dull; he’s overly cautious, sometimes humorless, and comes off as uncomfortably lugubrious on TV.  I clicked back to MSNBC for the Iowa and N.H. count, as I suspect many others did.

This is where a firebreather like Olbermann keeps the show moving; he’s opinionated, fearless, and articulate and funny enough to make his what he has to say worth hearing.  It’s doubtlessly true that he’s something of an egotistical prima donna, but then, you’d have to be to hold forth for an hour each weekday night and maintain an audience as Keith has all these years.  Many minor sins can be forgiven (by me anyway) because he’s reasonably honest, doggedly professional, and seems to care deeply about what he’s putting on the air, despite occasional excursions down Pomposity Lane.  Such people often do not play well with others, but they don’t waste your time with a shoddy finished product, either.

Supposedly, Olbermann’s lawyers and agent have been negotiating with Current this week and he’s assented to anchor future primary telecasts — if he comes back.  This past week Countdown was hosted by David Shuster with no mention of Keith that I heard.  That’s not a good sign.  However, rumor has it that if his ‘people’ work things out, Olbermann will return to Countdown next Monday.  If he doesn’t, we’ll just have to look for him elsewhere and don’t discount another tour of duty at CNN — every combination CNN has stuck into the 7:pm Eastern time slot has been an abysmal, embarrassing ratings stinkbomb, including the present scrap of scat, ‘OutFront’ with prissy Wall Street fembot Erin Burnett.  The simple fact is, CNN is on more cable boxes than Current or MSNBC and Olbermann might relish giving his nemesis at Fox News, Bill O’Reilly, a real challenge in the ratings.  (I have no doubt Keith would have blowhard Billo on the ropes in a month.)  The only question is: would  tepidly right-leaning CNN management put up with Olbermann, and vice versa, in return for that kind of ratings bonanza in prime time?  Stay tuned…

This entry was posted in Conservatives, Media, Politics and tagged Al Gore, Bill O'Reilly, Cenk Uygur, CNN, Countdown, Current TV, Erin Burnett, Jennifer Granolm, Keith Olbermann, MSNBC. Bookmark the permalink.
Tip Jar: If you have a few bucks to chip in, it would be greatly appreciated. Thanks!