If Mitt Romney ever manages to get himself elected president, here’s what the country will look like under his reign.  Although nearly as sociopathic, at least the loathsome Bush Boy was a failure as a ‘bidnessman’ and a little dumber than Romney. 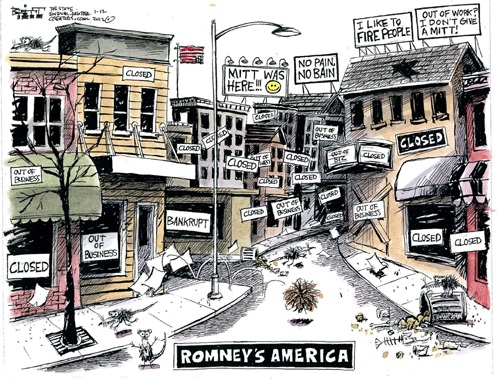 And here Gary Weiss of Salon provides an excellent rundown of Romney’s sociopathy as a presidential candidate and past head of Bain Capital:

Romney and the pathology of Bain

No one can make Mitt Romney look good — not even a crazy man with a program that’s slightly to the right of Juan Peron. Ron Paul, currently the second most popular Republican presidential candidate, may be nuts but Romney is arguably a lot worse: the standard-bearer of the worst aspects of borderline sociopathic, bottom-feeding American capitalism.

I don’t mean to call people names. I speak as a bona fide expert on these subjects, having covered business and written a book about a sociopath and having known many professionally through the years. I’m merely trying to provide a dispassionate analysis of Romney’s life and career, especially (but not exclusively) his record as a job-destroying corporate warrior at the Bain Capital buyout firm.

This entry was posted in 1 Percent, 2012 Election, Bizarre But Real, Cartoon, Conservatives, Corporations, Corruption, Idiots, Politics, Republicans, Wall Street, WTF? and tagged Bain Capital, Gary Weiss, George W. Bush, Mitt Romney, Salon.com, Sociopaths. Bookmark the permalink.
Tip Jar: If you have a few bucks to chip in, it would be greatly appreciated. Thanks!