The Immoral ‘Creative Destruction’ of Jobs That Made Mitt Romney Wealthier 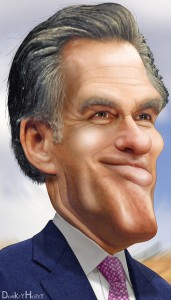 A brief excerpt below from the devastating just-released documentary of Mitt Romney, “When Mitt Romney Came to Town” (see full-length version here), that shows Romney and his partners in crime at Bain Capital only functioned as ‘job creators’ by accident and routinely cut employees jobs, wages and benefits to maximize profits for Bain.  Regarding his bragging on the ‘job creating’ success of Staples and Domino’s Pizza, most of those jobs were low-paid service work, and not the kind you can plan a future, buy a house, or raise a family on.  At Bain, Romney was a viperous, immoral Old Man Potter-meets-Gordon Gekko crapitalist who believed in the obnoxious notion of  ‘creative destruction’** which translated from CorpoSpeak means Romney and Bain destroyed jobs and profitable companies for their own gain.  As the Los Angeles Times pointed out last month:

“Romney himself became wealthy at Bain. He is now worth between $190 million and $250 million, much of it derived from his time running the investment firm, his campaign staffers have said.

“Bain managers said their mission was clear. ‘I never thought of what I do for a living as job creation,’ said Marc B. Walpow, a former managing partner at Bain who worked closely with Romney for nine years before forming his own firm. ‘The primary goal of private equity is to create wealth for your investors.’ “ […]

“No one came from Bain and said, ‘How can we hire more people?’ [Michael] Rumbin [a vice president of technology management at one of the company’s Bain gutted] said. ‘It was, ‘How do we turn our investment around and make a lot of money?’ Which they did.’ ”
— Tom Hamburger, Melanie Mason and Matea Gold, “A Look at Mitt Romney’s Job-Creation Record at Bain Capital,” Los Angeles Times, Dec. 3, 2011.

“And then there’s Mitt Romney, the patron saint of the 1%, who has shown a similar lack of empathy for our nation’s economically downtrodden. When asked what he’d do to help solve the massive foreclosure crisis that has put millions’ of families’ homes underwater, Romney replied that the best course of action would be to halt efforts to stop the foreclosure process’ and thus ‘let it run its course, to hit the bottom and let investors buy the home.’ Or put another way, Romney wants to allow people to suffer so some rich asshole can swoop in and make a profit from their misery. That’s right Christian of you, sir.”
— Brad Reed, “8 GOP Primary Moments That Would Make Jesus Weep,” AlterNet, Jan. 2, 2012. [Emphasis mine.]

Andrew Leonard at Salon.com sums up:

“In the 32 years since Ronald Reagan was elected president, there has never been more widely expressed antagonism and anger toward the practitioners of corporate-raider, leveraged-buyout, excessively compensated CEO, shareholder-value capitalism than there is now.

“And that’s Mitt Romney. That is who he is. He can flip-flop about everything else, but there’s no way to wriggle out of his essential nature. He’s the 1 percent — even Newt Gingrich says so.”
— Andrew Leonard, “The long overdue downfall of Gordon Gekko,” Salon.com, Jan. 9, 2012.

** “From the 1950s onwards, the term “creative destruction” has become more readily identified with the Austrian-American economist Joseph Schumpeter,[4] who adapted and popularized it as a theory of economic innovation. In Capitalism, Socialism and Democracy (1942), he developed the concept out of a careful reading of Marx’s thought (to which the whole of Part I of the book is devoted), arguing (in Part II) that the creative-destructive forces unleashed by capitalism would eventually lead to its demise as a system.[6] Despite this, the term subsequently gained popularity within neoliberal or free-market economics as a description of processes such as downsizing in order to increase the efficiency and dynamism of a company.”
— From the Wikipedia entry for “Creative Destruction.” See the article for links.