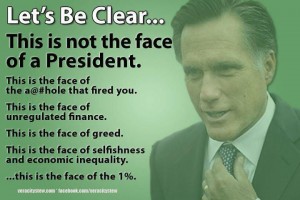 Mitt Romney, the blundering, dull, grown-up rich kid currently being beaten up by thrice-married ‘family values’ uber-hypocrite Newt Gingrich on the death march to the Republican nomination for president, apparently really thinks he made his fortune — or added to it, since Daddy left him a million bucks inheritance money — by dabbling in something he believes was the ‘free market.’ Of course, there is not now and never was any such thing; Romney’s firm Bain Capital gamed the system to make sure they alwaye profited from their leveraged-buyout corporate raiding schemes, even if Bain shareholders sometimes took a bath. The partners at Bain also helped themselves to a generous government-supplied 15 percent top tax rate, when the top rate for Romneyesque millionaires is supposed to be 35 percent. A sweet deal for Mitt, and it wasn’t due to the ‘free market.’

Incidentally, Romney keeps touting his magical job creating talents while with Bain, and points to the Staples office supply chain as a Bain property that provided middle-class jobs. Considering that the income for a U.S. middle-class family is about $45,000 a year, Mitt is talking straight through the seat of his pants. Most of the jobs at Staples are ‘Sales Associates’ (cashiers and floorwalkers) and ‘EasyTech’ personnel (that means they know how to use a copy machine and fiddle with a computer). Those jobs, according to Staples, pay thusly:

That means the EasyTech employees, at the top end, earn no more than $24,960 a year. Sales Associates can only gross a maximum of $20,800 annually, and both of those figures are before taxes. These are not middle-class jobs, Mitt; they’re miserable live in fear of missing a paycheck, take crap from your boss, and work longer hours without overtime jobs.

At any rate, Joshua Holland at AlterNet does some nice work of slicing up Mitt’s ‘free market’ mythology:

At Bain Capital, Romney used the tax code to redistribute wealth from taxpayers to his investors and partners.

The lion’s share of the wealth Mitt Romney accumulated during his years at Bain Capital was extracted not only by laying off workers and raiding their pensions, but by using what conservatives call “big government” to redistribute wealth from taxpayers to Bain’s investors and partners.

Bain Capital was not in the business of creating jobs, or even saving companies over the long-term. Its model had a relatively low rate of success; a study by Deutche Bank found that 33 out of 68 major deals cut on Romney’s watch lost money for the firm’s investors. Its richest deals made up for the flops, however, and Bain’s partners were guaranteed hefty fees regardless of how the businesses they “restructured” ultimately performed.