Isn’t It About Time to Drop ‘Slut’ from the Lexicon? 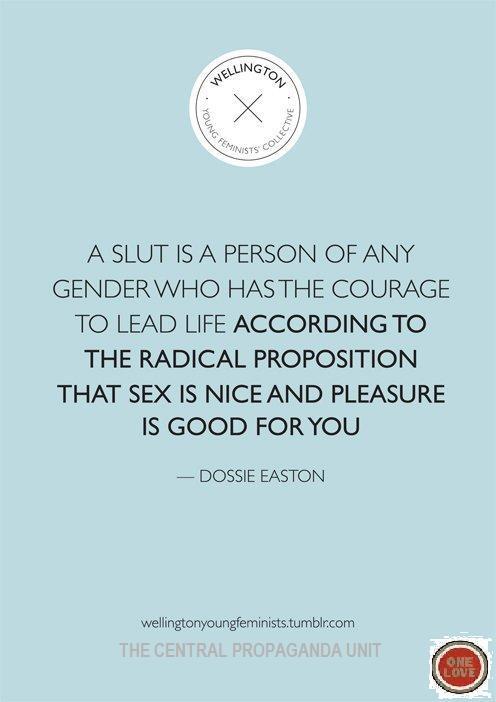 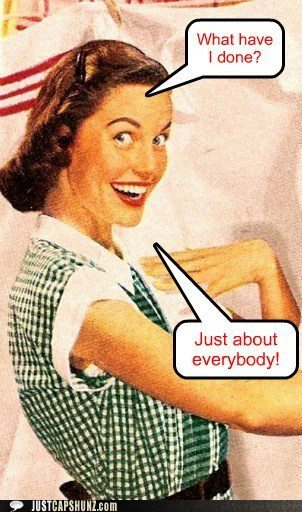 For as long as I’ve been alive (and I remember when people wore ‘I Like Ike’ buttons), ‘slut’ has been a nasty pejorative term for a woman who likes to have sex, usually with more than one partner, and occasionally with more than one partner at the same time. There is really no counterpart for the word to describe men who do precisely the same thing, and calling a straight man a slut will likely get you a blank stare or a laugh. It certainly won’t ruin their reputation. Although gay men will sometimes use the term for another gay man, it doesn’t have the — ahem — baggage that calling a woman a slut has. I thought this ugly word had been deep-sixed in the ’60s, but it’s re-emerged over the past couple of decades. I recall several young women I knew way back when who were driven into depression and despair by others calling them this word, either in gossipy whispers or right to their face and one of them, at 15, had not had sex with anyone yet, her body was just very ‘mature’ for her age and the jealous girls in her freshman class at high school irrationally hated her for it.  She quit school at 16, partly because of the vicious daily ‘slut’ hazing.  At any rate, I would never advocate censorship, but just as some other words are thought too cruel and inappropriate to call another person, slut should be added to the list, at least until there is one for men of equal sting. Here, the Urban Dictionary provides a workable definition of ‘slut shaming’:

An unfortunate phenomenon in which people degrade or mock a woman because she enjoys having sex, has sex a lot, or may even just be rumored to participate in sexual activity. Often it’s accompanied by urban legends such as the common virgin misconception that the vagina becomes larger or looser with use– in fact, sex has no effect on vaginal size.

However, since most people would rather women be MORE sexually active than less, slut shaming is counterproductive to the aims of most men and quite a few ladies.

Guy 1: Ha ha Megan had sex with two guys, she’s such a SLUT!

Guy 2: You idiot, do you want her to stop having sex? We should be encouraging this. Your slut shaming will simply discourage more women from sleeping with us and we will be virgins forever.

BTW, I hope this isn’t a real brand of soup: 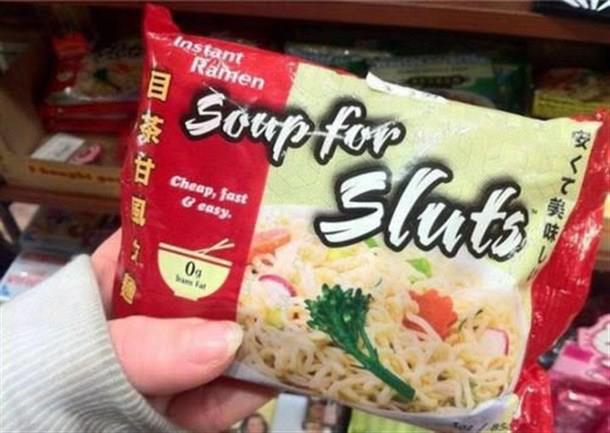 This entry was posted in Bizarre But Real, Idiots, Media, Quotes and tagged Dossie Easton, Sex is Good, Slut, Slut Shaming, Words. Bookmark the permalink.
Tip Jar: If you have a few bucks to chip in, it would be greatly appreciated. Thanks!