Here are videos of George Zimmerman in police custody shortly after killing Trayvon Martin with his 9mm pistol last February. His ‘friends’ and an alleged Sanford, Fla., police leak have said Zimmerman was viciously attacked by Trayvon who supposedly punched him in the face, broke his nose, banged his head several times on the sidewalk, and left grass stains on the back of his red jacket. Look closely at these two videos (the second one is a little clearer): does Zimmerman look like he has been in a fight? No broken nose, no wounds or scrapes on the back of his head, no blood on his shirt front and, unless the cops stopped by a laundry so he could wash his jacket, no grass stains. In fact, he has no bruises or any other indications that he was beaten. For the last week, his lawyer and his ‘friends’ like the mysterious Joe Oliver (who’s paying Oliver since he quit his TV job to support Zimmerman in the media?) have spread these false stories, endlessly echoed by the right-wing media machine. The videos don’t lie — Zimmerman was obviously not assaulted by anyone the night of the shooting. This should be enough for the DOJ to arrest Zimmerman for perpetrating a hate crime. Let’s see what happens.

Same video from The Daily Beast:

As any lawyer knows, if you can’t make a good case on the facts, you attack the character of the witnesses. The bare facts are that George Zimmerman, ignoring police advice, left his car armed with a pistol and shot an unarmed Trayvon Martin dead. In this case, the ‘witness’ is dead, so the wingnuts attack his character posthumously to try and convince any future jury that the never-arrested Trayvon Martin was some kind of gangsta thug, and the smearing continues. They are so desperate, the righties in the blogosphere have been circulating this fake pic, a photo that apparently originated with the white racist Stormfront site. 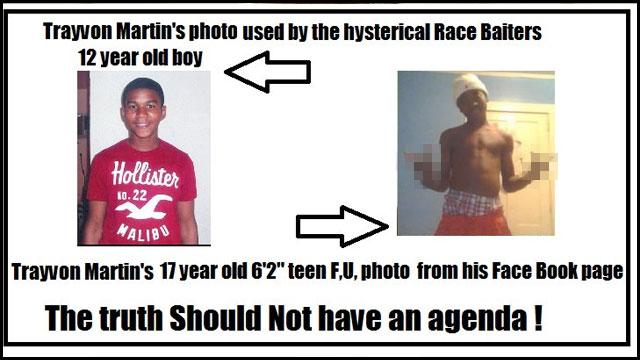 The photo on the right is NOT Trayvon Martin. Read on:

Finally, a little background on Zimmerman: