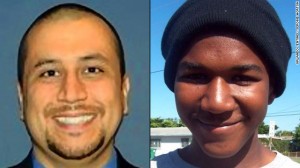 I have to admit I was wrong (see here) in thinking Florida Special Prosecutor Angela Corey would, for political reasons, just wait until the media firestorm passed and quietly let George Zimmerman go uncharged. That said, there are still some thickets here where treachery could be lurking: various lawyers in the media have said it’s very difficult to make the case of second-degree murder since the prosecutor has to prove that Zimmerman intended to kill Trayvon with a complete disregard for his life and based on ‘depraved’ thinking. How does Corey prove that without a confession from Zimmerman? (Some of the media lawyers thought she should have gone for manslaughter which is much easier to prove.) So, good Republican appointee Corey may be setting up a case she can’t win, but she is quelling protests and possible further investigations with this arrest and murder charge. Moreover, in a pre-trial hearing, based on an almost-sure defense motion to dismiss for lack of evidence, a judge could simply decide the evidence doesn’t support a second-degree murder charge and throw the case out of court before it reaches a jury. It’s also possible Zimmerman could plead down to negligent manslaughter in return for no time or short time in

jail and/or probation. I’m not making any predictions here, just exploring the options. Sorry to be this cynical, but I don’t trust politically-appointed Southern Republicans to administer justice in racially-charged cases like this, especially Republicans appointed by Florida Gov. Rick “Mars Attacks” Scott, one of the most crooked governors in the country.

George Zimmerman, the neighborhood watch volunteer who shot and killed Miami teenager Trayvon Martin, has been charged with second-degree murder.

State attorney Angela Corey, who took over the case after the state attorney of record, Norman Wolfiinger, recused himself from the case last month, made the announcement Wednesday, and confirmed that Zimmerman is in custody.

This entry was posted in 2012 Election, Conservatives, Corruption, Media, Politics, Republicans, Teabaggers, Wingnuts and tagged Angela Corey, Florida, George Zimmerman, Joy-Ann Reid, Rick Scott, Second-Degree Murder, The Grio.com, Trayvon Martin Murder. Bookmark the permalink.
Tip Jar: If you have a few bucks to chip in, it would be greatly appreciated. Thanks!