Video: Junior Still as Dumb and Short-Sighted as Ever 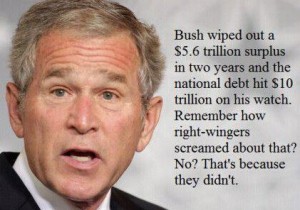 Yep, the Crawford Dauphin is just as goofy and lame as ever and now he has the ‘President George W. Bush Institute’ (gag) to spread his daffy cut-taxes-for-the-rich-and-deregulate-everything ideology that collapsed the economy in 2008. Ha, ha, he wishes they weren’t called the ‘Bush Tax Cuts’ — thinks they would be more popular under another name. Sure, if you call a reeking port-o-potty a floral greenhouse you might fool some of the people some of the time — until they have to use the reeking port-o-potty, then reality, ahem, stinks in.  Incidentally, Mitt Romney is running on preserving the failed Bush tax cuts and corporate deregulation because both would temporarily enhance the bank accounts of Mitt and the Bush family and their wealthy cronies. Meanwhile, the rest of us suckers can figure out a way to pay for the rich to get richer while we get poorer. As Steve Benen noted at The Maddow Blog (H/T to Crooks and Liars):

“Given the spectacular nature of his economic failures, former President George W. Bush should probably avoid lectures on what policymakers should do when cleaning up his mess. But the man with the limitless chutzpah still likes to think he has some credibility on the subject.” […]

“It’s tempting to go through Bush’s remarks, detailing all of his errors of fact and judgment. I’m inclined to explain to the former president that millionaires and billionaires aren’t “the so-called rich”; they’re the actual rich. It’s also tempting to note than when Bush says, “If you raise taxes, you’re taking money out of the pockets of consumers,” the same underlying policy argument applies to food stamps and unemployment benefits. And while we’re at it, it might also be fun to explain that tax increases wouldn’t be quite so necessary had Bush not blown a record-high budget surplus, added $5 trillion to the debt, and left President Obama with a $1.3 trillion deficit.

“But you know what? Let’s put that aside for a moment and consider a larger point: Bush has been so severely discredited, listening to him give economic advice is like getting tips from Mitt Romney on policy consistency.

“Bush had his shot for two terms. He got the massive tax breaks he wanted; he got the spending levels he wanted; he got the regulatory framework he wanted. We tried it his way for nearly a decade and the result was an unmitigated disaster for the ages. As has been well documented, we’ll be dealing with the consequences of his astonishing failures for many, many years to come.

“And now he wants to lecture us on tax and economic policy? Is he serious?”
— Steve Benen, “Bush claims credibility on taxes, economic policy,” The Maddow Blog, April 10, 2012.