Why Do Democrats Apologize for Telling the Truth? 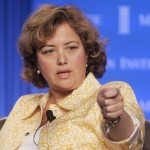 CNN political analyst Hilary Rosen, by saying that Mitt Romney’s wife Ann never worked outside the home, didn’t make a personal attack on her — she was just pointing out the truth that, as Mitt’s campaign-ordained ‘economic adviser’ on the economy and women, she wouldn’t know much about it. Instead of apologizing, Rosen should have said something like, “Let me clarify that I have nothing against Ann Romney but, because of her husband’s wealth, she was able to make a choice to stay home with her kids. Many American women aren’t able to make that choice because they have to work outside the home to support their families. On this point — mothers who must work outside the home — Ann Romney has no experience, and that’s all I was saying. Perhaps Mitt should try talking to women who have to work outside the home to put food on the table. It might open his eyes to why we need such things as the Lily Ledbetter equal pay for women act.” But the Dems went into their customary ‘flinch and cringe, please don’t hit me’ crouch, apologizing all over the place for telling the truth, and slapping Rosen as hard as any Republican operative, while the Romney hucksters lied that she’s an ‘Obama adviser.’ Listen, you apologize when you’ve done something wrong, and telling the truth, in this case, is not wrong. Now the Dems are working in the ludicrous GOP “Democrats hate stay-at-home moms’ meme, and, by trying to counter it (“No, really, we don’t hate stay-at-home mothers”) they’ve embraced it to the point where there is no way out for them except to hope it dies down quickly. (Trust that Romney and his wife will keep it going as long as crowds aren’t actively booing him for bringing it up, and his campaign surrogates will squeeze it dry as well. For the low-info voter, it could become another ‘pox on both their houses’ moment, which means the Republicans win by buffering the deleterious effect of their horrendous state-by-state War on Women.)

Don’t the Democrats realize they are about to experience a firestorm of this kind of phony-baloney trumped-up bullshit, aided by all the unaccounted-for Citizens United millions going to Karl Rove’s sleazy Crossroads group, et al? You don’t win elections by apologizing for telling the truth about your opponent; you win by sticking to the truth about them with every keystroke and word out of your mouth.

Hilary Rosen Was Right: Ann Romney Is Out of Touch with Most Women
— By Judith Warner, Time magazine, April 13, 2012