Study Says Conservatives Have a Bigger Amygdala Than Liberals; Good News for Right-Wingers? 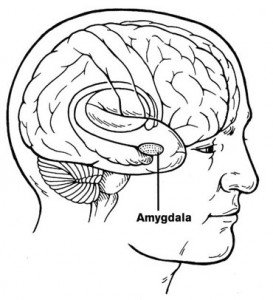 Actually, no, it’s not. As to the short piece below, I know very few liberals who have ‘rosier outlooks’ these days, and most do consider the ‘worst case scenario’ in their musings, although overall I guess most liberals do tend to be more optimistic regarding our future prospects as a species (with some notable exceptions). At least they think social problems can be solved in ways that don’t involve prayer, guns, or making grandma subsist on cat food. Meanwhile, most of the conservatives I know are generally depressed, and for good reason: they are being forced to vote for a wealthy flip-flopping Republican for president they dislike only a little less than Obama; they are losing ground on domestic issues, especially with their wives and daughters; they suspect the Democrats are constantly outwitting them; they are bored with the endless repetitions of the right-wing media machine and are beginning to see through some of their own shabby propaganda; and they are still cowering at night at home in their beds of ‘unnamable, faceless dreads’ that constantly barrage their limited imaginations courtesy of their huge amygdalas, the mental repository of irrational fear and pop-eyed panic. Must be hell, but I think it is mostly self-imposed and even curable.

If the study is confirmed, it could give us the first medical explanation for why conservatives tend to be more receptive to threats of terrorism, for example, than liberals. And it may help to explain why conservatives like to plan based on the worst-case scenario, while liberals tend towards rosier outlooks.
— From Phil Proctor, Planet Proctor

This entry was posted in Bizarre But Real, Christopublicans, Conservatives, Idiots, Media, Obama, Progressives, Republicans, Teabaggers, Voting, Wingnuts, WTF? and tagged Amygdala, Brains, Fear, GOP Propaganda, Left, Mitt Romney, Phil Proctor, Right. Bookmark the permalink.
Tip Jar: If you have a few bucks to chip in, it would be greatly appreciated. Thanks!