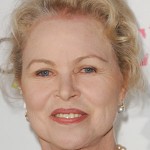 Michelle Phillips, the last surviving original member of the folk-pop group The Mamas and the Papas, is celebrating her birthday today (b. 1944). She’s also made a name for herself as an actress, appearing in projects as diverse as the 1973 film “Dillinger” to a role on TV’s “Star Trek: The Next Generation” as Capt. Picard’s paramour.  Here’s the appropriate TMATP tune, “Monday, Monday”:

This entry was posted in Blues, Music, Rock, Video and tagged California Dreamin, folk-rock, Mamas and Papas, Michelle Phillips, Monday Monday. Bookmark the permalink.
Tip Jar: If you have a few bucks to chip in, it would be greatly appreciated. Thanks!