Video: The Contemptible Romney Flew in His Own Group of Black Republicans for NAACP Speech 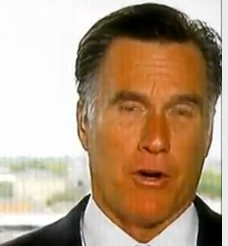 It’s not surprising that the most corrupt and deceptive politician since Richard Nixon would try to hoodwink the MSM and the American public into thinking he actually had some support at the NAACP, but as shifty and typically Romney as that is, worse is that it seems the major reason for his appearance yesterday at this conference was to produce a videotape clip of him being booed by a black audience to solidify the white conservative racists in the Republican base, a base that must show up to vote for him if Romney is to have any chance of beating Obama. In what has become a pattern for the would-be Misleader-in-Chief, Romney is long on broad statements about creating jobs and educational opportunities but short on detailed plans to accomplish either, save giving more tax cuts to the rich, further deregulating corporations, and crossing his fingers. Common people — you know, college kids, baby-sitters, nail ladies and other such uneducated riff-raff — who don’t understand how Romney’s Reverse Robin Hood system could possibly make the economy better can be forgiven for thinking it all sounds like Junior Bush after a long night swigging 100-proof at the frat house, and they also remember enough of recent history to recall their tax dollars had to bail out the Moneygentsia — the ones who allegedly understand such things — so the entire economic system didn’t go into sudden cardiac arrest in 2008. If Romney is by some chance elected and puts his mad policies into place, will he and his spoiled Hamptons pals front the money for America’s economic revival after the inevitable next crash? Don’t count on it — they’ll be gone visiting their untaxable income in overseas banks, and President Mitt may join them with a crowd of angry torch-wielding nail ladies pursuing him bearing a bucket of tar and a basket of feathers.

Visit msnbc.com for breaking news, world news, and news about the economy

According to NAACP official Hilary Shelton, Mitt Romney tried to rig the crowd at the convention by flying in his own non-member African Americans to cheer for him.

After getting booed at the NAACP convention today, Mitt Romney headed straight for the sweet embrace of Neil Cavuto and Fox News to try and spin away the pain. […]

Romney also claimed that he got a standing ovation at the end of his speech.

Many of Romney’s claims were debunked by Senior Vice President for Advocacy and Policy and the Director of the Washington Bureau of the NAACP, Hilary Shelton who said that the only African Americans Romney met with after his speech were those that he brought with him. Mr. Shelton explained that Mitt Romney flew in his own African-American supporters who were not affiliated with the NAACP, in order to have some people in the crowd cheering for him.

Romney did not meet with any of the convention rank and file after his speech, and only met with the African-Americans that he planted in the crowd.