Today’s Quotes: They Get It From Reagan 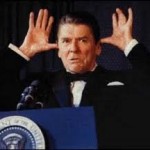 Ever wonder where current Republican twits like Sarah Palin and Michele Bachmann get some of their goofiest, dumbest twists on history, society and government? Seems they are simply borrowing from the ‘Master,’ the same mental colossus many members of the GOP want engraved on the dime and enshrined on Mount Rushmore:

“Why should we subsidize intellectual curiosity?”
– Ronald Reagan, campaign speech, 1980.

“Today a newcomer to the state is automatically eligible for our many aid programs the moment he crosses the border.”
– Ronald Reagan, in a speech announcing his candidacy for Governor of California, January 3, 1966. (In fact, immigrants to California had to wait five years before becoming eligible for benefits. Reagan subsequently acknowledged his error, but nine months later said exactly the same thing.)

“Unemployment insurance is a pre-paid vacation for freeloaders.”
– California Governor Ronald Reagan, in the Sacramento Bee, April 28, 1966. (The people doing the ‘pre-paying’ are the same ‘freeloaders’ collecting unemployment. They paid into the fund when they were employed.)

“We were told four years ago that 17 million people went to bed hungry every night. Well, that was probably true. They were all on a diet.”
– Ronald Reagan, TV speech, October 27, 1964.

“History shows that when the taxes of a nation approach about 20 percent of the people’s income, there begins to be a lack of respect for government…. When it reaches 25 percent, there comes an increase in lawlessness.”
– Ronald Reagan, in Time, April 14, 1980. (History shows no such thing. Income tax rates in Europe have traditionally been far higher than U.S. rates, while European crime rates have been much lower.)

“Because Vietnam was not a declared war, the veterans are not even eligible for the G.I. Bill of Rights with respect to education or anything.”
– Ronald Reagan, in Newsweek, April 21, 1980. (Wrong again.)

“What we have found in this country, and maybe we’re more aware of it now, is one problem that we’ve had, even in the best of times, and that is the people who are sleeping on the grates, the homeless who are homeless, you might say, by choice.”
– Ronald Reagan, defending himself against charges of callousness on Good Morning America, January 31, 1984.

“All the waste in a year from a nuclear power plant can be stored under a desk.”
– Ronald Reagan, quoted in the Burlington (Vermont) Free Press, February 15, 1980. (In reality, the average nuclear reactor generates 30 tons of radioactive waste per year.)

“I have flown twice over Mount St. Helens. I’m not a scientist and I don’t know the figures, but I have a suspicion that one little mountain out there, in these last several months, has probably released more sulfur dioxide into the atmosphere than has been released in the last ten years of automobile driving or things of that kind.”
– Ronald Reagan, quoted in Time magazine, October 20, 1980. (According to scientists, Mount St. Helens emitted about 2,000 tons of sulfur dioxide per day at its peak activity, compared with 81,000 tons per day produced by cars.)

“…until now has there ever been a time in which so many of the prophecies are coming together. There have been times in the past when people thought the end of the world was coming, and so forth, but never anything like this.”
– Ronald Reagan revealing a disturbing view about the “coming of Armageddon,” December 6, 1983.

“This loathing for government, this eagerness to prove that any program to aid the disadvantaged is nothing but a boondoggle and a money gobbler, leads him to contrive statistics and stories with unmatched vigor.”
– Mark Green, Reagan’s Reign of Error

“Ronald Reagan is the first modern President whose contempt for the facts is treated as a charming idiosyncrasy.”
– James David Barber, presidential scholar in “On Bended Knee: The Press and the Reagan Presidency,” by Mark Hertsgaard

“He demonstrated for all to see how far you can go in this life with a smile, a shoeshine and the nerve to put your own spin on the facts.”
– David Nyhan, Boston Globe columnist

“He has the ability to make statements that are so far outside the parameters of logic that they leave you speechless”
– Patti Davis (formerly Patricia Ann Reagan) talking about her father in “The Way I See It.”

Quotes selected from a post at DemocraticUnderground.com. Previously posted by me at LTSaloon.org

This entry was posted in 2012 Election, Bizarre But Real, Christopublicans, Conservatives, Humor, Quotes, Religion, Republicans, Teabaggers, Wingnuts, WTF? and tagged GOP Presidential Candidates, Michele Bachmann, Nutcase Quotes, Ronalld Reagan, Sarah Palin. Bookmark the permalink.
Tip Jar: If you have a few bucks to chip in, it would be greatly appreciated. Thanks!