November 5, 2011 is going to be a busy day with people all over the country switching their accounts from the big national banks to credit unions and now Anonymous has vowed to bring down Fox News for their comments regarding the OWS protests with Operation FOX Hunt Day. I’m not sure I agree with the cyber attacks but if any organization deserves it, that would be Fox News for their years of slime and propaganda serving the top 1 percent at the expense of the other 99. Meanwhile, Fox owner Rupert Murdoch himself is having problems with his News Corp. shareholders — they want him out following the burgeoning scandals he and his family have visited upon their investment. It’s even possible son James Murdoch could end up in jail. If Rupert goes, I think it’s a safe assumption that Roger Ailes, the bitter paranoid Nixonite behind Fox News’ right-wing programming, would be gone, as well. It’s conceivable that by next year we could see a ‘kinder, gentler’ Fox with the worst miscreants such as Sean Hannity gone from the line-up. 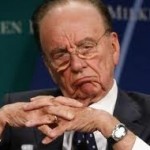 He was as combative, up against it and past his prime as 2011’s other fallen tyrants. This was likely his last shareholders’ meeting